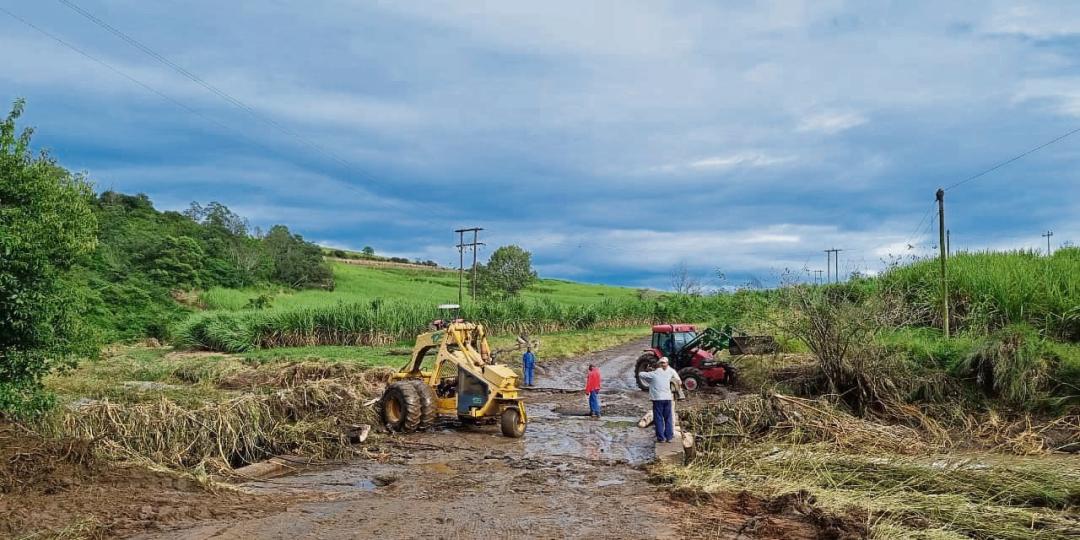 Farmers in KZN’s Mid Illovo area have been forced to fix roads that were damaged by the floods due to the lack of initiative from the government.
0 Comments

Tired of waiting for local government to repair key rural access roads that are crucial to financial livelihoods and sustained food supply in and out of communities, KwaZulu-Natal farmers have embarked on their own restoration efforts following further damage caused by the recent floods.

The state of the majority of rural roads across the province has been in the spotlight due to the neglect of maintenance and upgrades to rural infrastructure throughout KZN. The heavy rains of the past month, where some areas saw as much as 400mm fall over 24 hours, has now resulted in many rural single-access roads being washed away and rendered nearly impassable or near a state of collapse.

Main rural access routes into and out of Mid Illovo and some parts of Creighton have been severely affected. In Mid Illovo, main access to the community was cut off when a low-level bridge was completely submerged by the flooding.

“Sugar and timber could not be transported out of the district and diesel drops were impossible, resulting in the complete halt of farm operations, no food and no income. Should an emergency have taken place, ambulances, police and security companies did not have access. We have no schools in the area and children couldn’t get to school. The impact was immense,” said Brett Chubb, chairperson of the Mid Illovo Farmers’ Association.

Fixing the rural roads in Mid Illovo is a large undertaking, requiring the community to use their own funds to restore them to working order.

“We have used 15 tractors and trailers, five TLBs, brush cutters, chainsaws, quarry and rock loads. In addition, each of these needed drivers and operators, and a further eight conductors, eight supervisors and 60 staff members were needed to get the job done,” said Chubb.

Taxi owners have also demanded action on repairing the roads and protested on April 26 by burning tyres along District Road P118 in Mid Illovo.

“We have very good relationships with local taxi drivers and they have expressed their thanks for the work we are doing to repair the roads. If farmers had not taken it upon themselves to fix these roads, there would be dire consequences for the community,” said Chubb.

In Creighton, in the Harry Gwala District, farmers have taken it upon themselves to repair roads that have been totally washed away.

Road D170 between Creighton and Tarrs Valley, which is home to several small communities, was totally washed away during the flooding two weeks ago. Farmers said there had been no acknowledgement from local government on the state of the road. The local community, which uses the road to get to and from work on farms and businesses in Creighton, now have to navigate the massive five-metre-wide sinkhole by foot.

Creighton farmer Hayden Stokes has set about repairing the road himself.

“At the farmer’s expense, at nearly R20 a litre of diesel, this is what we have to do to gain access to use our roads. It is disastrous for farmers and rural communities,” said Stokes.

Prior to repairing roads at their own cost, both Mid Illovo and Ingwe farmers’ associations were in constant communication with the Department of Roads and Transport.

“We provided letters from all those who have been affected by the state of the roads, have had numerous meetings with different stakeholders, and have taken officials onto the roads to show them our concerns.  When roads have been repaired, these problems reoccur shortly afterwards,” said Chubb.

KZN Agricultural Union Kwanalu has implemented a roads campaign to work within the government at local, district, provincial and national level

Kwanalu recently hosted a high-level Roads Impact webinar with leaders of the province’s farmers’ and landowners’ associations to discuss the state of roads and the impact on food security. Agri Eastern Cape and Agri Free State union leaders also attended.

“The collective effort of provincial agricultural unions is essential to invoking urgent action on a problem that affects everyone in the country. Agriculture and rural livelihoods are affected, but so is the public who rely on this supply chain for food,” Kwanalu CEO, Sandy La Marque, told delegates.

Kwanalu is awaiting feedback regarding meetings requested with the KZN MEC for Transport, Community Safety and Liaison, Peggy Nkonyeni, the Department of Transport Director General Alec Moemi, and other relevant officials.

“We hope to receive a response for engagement soon. If not, we may have to look into legal and practical support,” said La Marque.