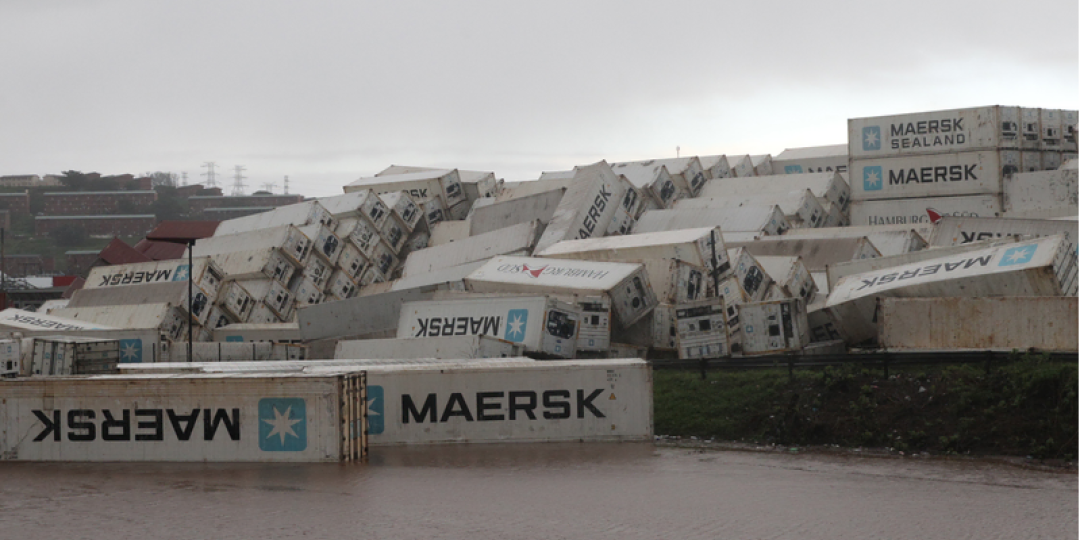 Transnet Port Terminals operations are back at full capacity with vessel offloading, loading operations and truck deliveries operating optimally following the devastating floods that hit Kwazulu-Natal and the Eastern Cape in April.

“Sectors that power the provincial economy such as manufacturing, FMCG, retail and wholesale, distribution, warehousing and freight have been particularly hard hit by these floods. Given the importance of the Port of Durban to the national and continental economy, restoring operations and rehabilitating damaged port and associated infrastructure has been a priority,” Ramaphosa said.

The government welcomed the pace of progress towards restoring port road infrastructure and operational efficiency, including terminal clearing, rail line water draining and reopening, stormwater jetting, and the repair of sea walls, he added.

“We have been advised that the Transnet National Ports Authority has so far cleared more than 340 cubic metres of debris from the harbour. With regards to port traffic, capacity has been restored and the port has handled more than 100 vessels since the 13 April 2022, and tugs are all operating at full capacity,” Ramaphosa said.

“Terminal operations are also back at full capacity, with vessel offloading, loading operations and truck deliveries operating optimally. Efforts by Transnet to deal with rail infrastructure damage are also proceeding, although this is likely to take some time given the extent of the damage.”

Transnet is also engaged in a consultation process with communities who will be impacted by the construction works.

“Work under way to fix affected roads, especially strategic roads that ferry goods to the port, is also proceeding at a good pace, with Sanral as the implementing agency. A number of road repair projects have been identified, with an immediate focus on the N2 and N3 highways, and the necessary systems are being put in place so those are not delayed and that they proceed as quickly as possible,” Ramaphosa said.

Local government has also provided him with a progress update on the restoration of services and on what is being done to restore water and electricity supply to all areas.

“It is also encouraging that the restoration of services is proceeding well and as quickly as possible. Eskom has been assisting municipalities with fault detection and repairs and damage assessments. It has been providing relief in the Ugu district by removing water and sanitation pump stations from the load shedding schedule,” he said.

Water restoration in most of the metro was near to full capacity, except for the north region, which was “a particular concern”, he added.

“Significant work has been done to repair damaged water infrastructure such as waste water treatment works, pump stations and reticulation. The deployment of built environment professionals to conduct flood damage assessments and participate in the Joint Operating Committee has enabled us to have the necessary technical expertise put to service in the affected districts.”

However, he said challenges that had a direct and serious impact on the provincial economy still remained.

“The interruptions to rail have impacted the delivery of exports to the port, with automotive and citrus produce particularly affected. The short-haul trucking solution to facilitate faster inward container movement is working well, but will put further pressure on traffic flows, particularly around Bayhead Road. Completing all the rail repair works that have been identified within the necessary time frames will be critical.”

He added that discussions between eThekwini Municipality and Toyota were under way on what measures were needed to restore the Toyota plant in Prospecton to full capacity and to secure its resilience for the future.