Truck hijackers are seemingly “back at work” after a decrease in the number of incidents during the first few months of strict lockdown. The number of hijackings is now back to pre-lockdown levels.According to the Transported Asset Protection Association (Tapa), the Covid-19 pandemic restricted the activities of truck hijackers, but annual data has shown a 1.7% rise in incidents, with Gauteng still the place where hijackers are consistently the most active.

According to data from the South African Police Service (SAPS), the number of recorded truck hijackings fell by 30% year-on-year in the three months ended 30 June 2020, with 198 incidents in total – the lowest level in five years. Gauteng saw 93 attacks on trucks over this three-month period, down 37.9% on the same quarter of 2019.

There were also fewer truck hijackings in the Western Cape (37), Mpumalanga (15), KwaZulu-Natal (13), North West (3) and Limpopo (2). Annual statistics for the 12 months ending 31 March, however, show a more familiar picture, according to Tapa.“Truck hijackings across South Africa recorded by SAPS rose 1.7% over the corresponding 12 months to 1 202. This compares to the highest annual rate in the past decade of 1 279, seen in 2014/15,” reads a report.

Tracker’s vehicle crime statistics for the year July 2019 to June 2020 also indicate that hijacking is on the rise and remained prevalent during the lockdown period even with a significant drop in vehicle crime.

According to SAPS, of the top 30 police stations across the country that recorded truck hijackings from March 2019 to March 2020, 21 were in Gauteng province.

Overall, six stations reported 20 or more incidents in the year including the following five in Gauteng:

Thorsten Neumann, president and CEO of Tapa Europe, Middle East and Africa (Emea), has called on companies to share their incident data with Tapa’s Incident Information Service (IIS) saying it would allow the organisation to build on the current intelligence provided by law enforcement.“We can also use this knowledge, as an industry, to protect ourselves better against these types of violent attacks.” According to Ron Knott-Craig, executive: operational services at Tracker South Africa, Gauteng continues to experience the most vehicle crime with criminals often taking advantage of opportunistic situations making it imperative to always remain vigilant in the province. 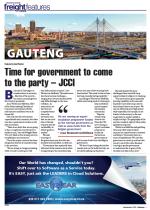