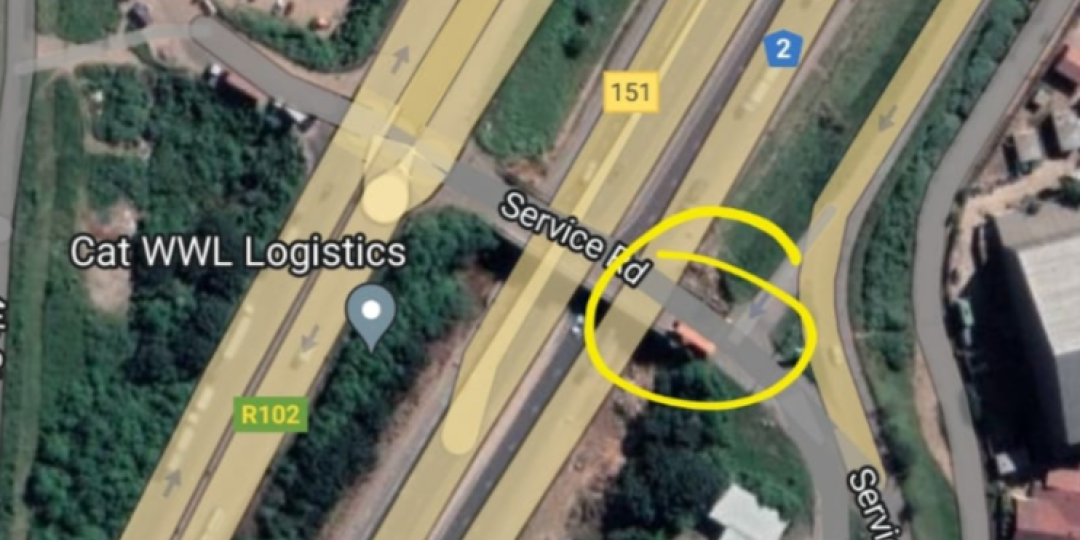 The encircled area on this screen grab from Google Earth shows the gaping hole that opened up next to the bridge needed by heavy-haul operators to get across the N2.
0 Comments

Durban port has become jammed up with abnormal loads that heavy-haul operators can’t move because of route snags, with one such transporter saying he’s got Komatsu dump trucks worth $3 million that have been stuck at the port for three weeks.

According to Rogan Brent, managing director of Shanduka Specialised Transport (SST), the problem arose when April’s floods opened up a 10-metre gouge on the approach section of a bridge used to get across the N2.

Known as the ‘B-Route’, the bridge near Durban’s old airport is a vital link to manoeuvre cargo with a laden height of more than 5.1 metres on towards the N3.

However, the hole in the approach section meant abnormal cargo started making its way through the abandoned airport, directly adjacent to the B-Route bridge.

Brent said a route assessment of the old airport showed that it was a workable alternative, which some heavy-haul transporters started to use – until an incident on June 2 shut off that route too.

He explained that overhead signage from the airport was pulled down when the abnormal load passed underneath, and that the transporter in question also “clipped” a section of the old airport building.

“It’s entirely negligible though and was completely avoidable. They were under police escort, as all cargo of these dimensions are supposed to be, and it should never have happened if somebody had paid attention.”

He said that if the transporter had made use of the centre lane as he made his way through the airport, as opposed to an inside lane, there would have been more space to get around built-up structures.

Unfortunately, the incident prompted Transnet, owners of the property, to inform the Department of Transport that the airport alternative was off limits.

Jokes aside, that the dilapidated airport was anyway going to be pulled down for a port development, Brent emphasised that abnormal load transporters were now stuck at the port with no recourse other than sitting it out.

“We are completely stuck,” he said.

“Nothing can come in or leave the port. We have had various communications with Transnet who keep saying: ‘We’re looking at it, we’re working on it, it is with legal and compliance, X, Y, Z, but nothing happens.’”

Brent added that a week after the poorly handled shipment through the airport, an alternative route was proposed and put to the test, but unfortunately turned down.

“It was found that three would be too much contra-flow on the N2, about three kilometres worth, and that it wouldn’t have worked.”

As a result, heavy-haul operators such as SST, keen to deliver its dump trucks to copper mines in Zambia, are doing whatever they can to get their loads out of the port.

“The real high stuff is a major problem,” Brent said.

“We have shippers, consignees, agents, truckers, everybody on their hands and knees, begging and pleading with Transnet to open the airport route. You can’t just shut us down like this.”

In the meantime, Transnet is charging them standing cost at the port, running into thousands and causing some transporters to abandon loads inside the port.

“It’s crisis. They need to open the airport route so we can get out.”

Brent added that the easiest solution would probably be to fill the gouge with construction gravel.

“It would be the easiest thing to do but instead we’re stuck while Sanral (South Africa’s National Road Agency) said it’s going to take until at least October before the approach section at the bridge is fixed.

“We simply cannot wait that long. We have companies that are perfectly willing to help fill the hole if it meant getting abnormal movements back on track.”

Clearly irate about the situation, Brent said even Richards Bay was no longer an alternative for clients eager to get abnormal cargo into South Africa.

He said the port had trouble coping with coal volumes ever since last year’s conveyor belt fires that very much seemed like sabotage.

As for Port Elizabeth (Gqberha), he said it was an option but would add major cost to the distance and journey time of abnormal loads intended for the Reef and beyond.

"Without Durban we’ve got heavy loads going nowhere. But clients are asking me: ‘What about Maputo, Beira, and Walvis Bay?’, to which I say no, no, and no.”

He said that Walvis Bay wouldn’t work because of Namibia's own logistical challenges and that the road infrastructure serving ports like Maputo made it a non-starter.

“You won’t be able to get out of the port. Bridges in Mozambique don’t confirm to heavy load specifications and in many instances the infrastructure hasn’t been properly repaired after the civil war.

“Durban is it,” Brent said. “We simply have to sort it out.”

Heavy-haul operators were hopeful of hearing from Transnet Property about using the old airport as a bypass route earlier today.

It’s not sure if that happened.

* This story has since been updated. At 18:45 on Monday evening, June 20, Rogan Brent said there had been a very productive meeting with Transnet. He reported that the parastatal said it was aware of the concerns of heavy-haul transporters, and was determined to find a lasting solution. He said he was confident about what had transpired during the meeting and that abnormal load operators could expect to see a resolution soon to the B-Route issue.