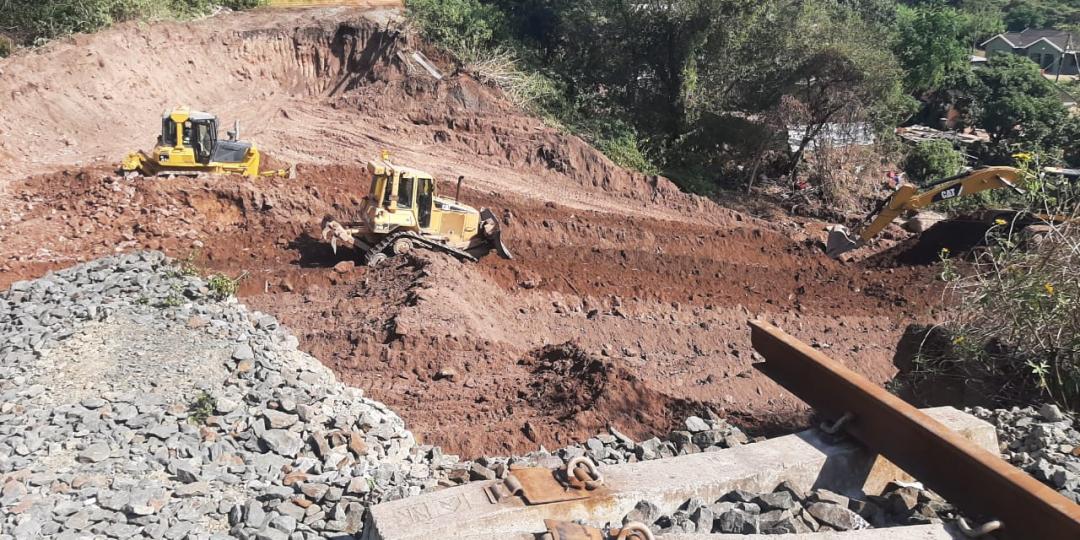 Transnet Freight Rail has embarked on the difficult task of repairing the rail network in KZN. Source: Lyse Comins.
0 Comments

Kwazulu-Natal businesses incurred damages estimated at R6.4 billion during the recent deadly floods that devastated the province, a national government survey has revealed.

KZN Premier Sihle Zikalala told local business leaders at the KZN Growth Coalition breakfast in the city on Thursday that the floods had cost the province’s economy an estimated R20 million.

He said a survey by the Department of Trade Industry and Competition had revealed that the cost of the damages to local companies was estimated at R6.4 billion. The majority of businesses affected were in the agriculture (22%) and manufacturing (12%) sectors.

“What we are facing as a province is unprecedented. While from March 2020 the whole country faced the consequences of a shutdown occasioned by Covid-19, in July 2021 KwaZulu-Natal also had to deal with civil unrest. This meant that when we were hit by the floods in April, the province was already on its knees, and we were just picking up the pieces,” Zikalala said.

The department of public works and infrastructure and the department of defence would soon finalise the construction of 18 damaged bridges across the province, he added.

“We have noted with contentment the announcement by Acsa confirming that there is no aviation fuel shortage at King Shaka International Airport and that there is an excess supply of seven days available at any given point. Acsa says the shortages experienced at OR Tambo International Airport were due to the rail problems between Durban and Gauteng.”

He said the province was on track to ensure that all water treatment plants that that had been washed away were refurbished.

“With regard to the supply of water at Nestle and Defy by the Uthukela District, the municipality has developed a water supply response plan and is in regular engagement with both companies in pursuit of a lasting solution,” Zikalala said.

The city is also attending to the intermittent power supply problems experienced at the NPC Cement factory.

“The floods are an indictment of how we have allowed our cities to develop without much consideration for the environmental risk and geography. In the long term, we must adopt measures to take better care of our environment by building and farming in ways that protect our settlements and industrial sites. We may need to make hard choices and consider the resettlement of communities and businesses away from flood-prone areas.”