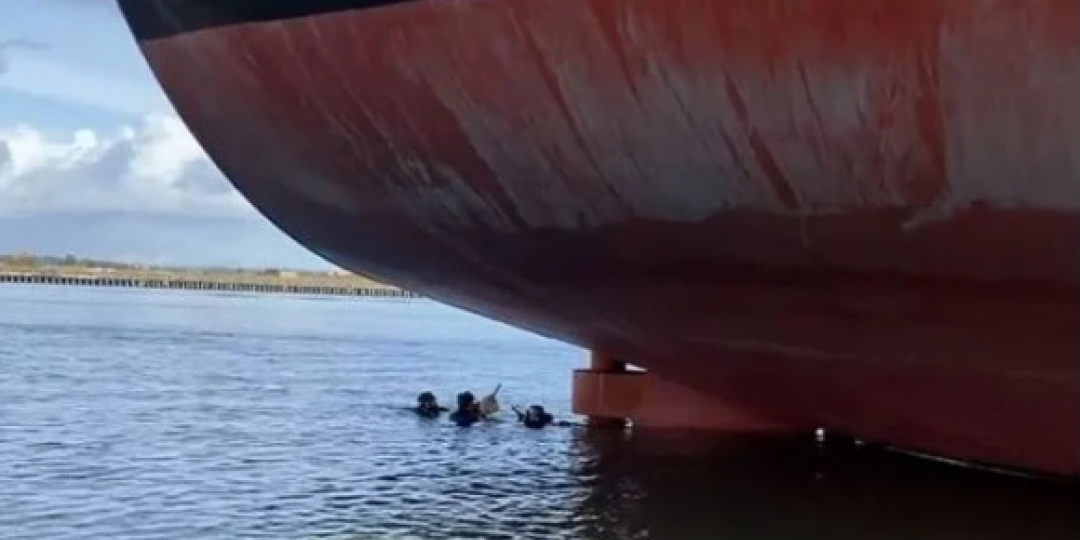 Police divers inspecting the bulker and area after the diver and cocaine were found in Newcastle. Source: NSW Police Force.
0 Comments

Mystery surrounds the discovery of a scuba diver who was found dead, with sophisticated diving gear, on the beach along with packets of cocaine after small boats were seen surrounding a bulker that arrived in Newcastle, Australia at the weekend.

Australian police and border protection services are investigating the bulker that arrived in port after the body was discovered and packets, believed to be cocaine, were later found in the harbour.

Maritime Executive reported that according to authorities, the port had been under observation as a drug smuggling risk but they were “puzzled by the odd circumstances of this situation, leading them to believe it is part of a larger smuggling effort”.

The 60 000-dwt bulker Areti arrived in the port on May 8 from San Lorenzo, Argentina. The vessel is registered in the Marshall Islands and is laden with soybean powder. It was inspected when it arrived in Newcastle.

Police were later alerted to the body of a diver which they discovered on the beach. They noted the “unusual circumstances” of the man who is believed to be a foreigner and who was wearing a wetsuit with sophisticated diving gear.

“They said that he had a high-tech rebreather that does not emit air bubbles and typically is used only by a very skilled diver. They also discovered yellow packages around the harbour which, on examination, they said appeared to contain cocaine,” the publication reported.

Police have recovered 50 kg of cocaine valued at US$13.8 million and are continuing to search the bulker, the shoreline and the harbour for further drug packages. The police also alleged to local media that they suspected there could be a total of US$70 million of cocaine involved.

Police divers on May 9 searched the hull and the area around the vessel and were believed to searching for signs of a sea chest, Maritime Executive reported. They detained the vessel to interview the crew in more depth for possible involvement in the alleged smuggling.

A review of surveillance footage from the harbour shows that two small boats, one an inflatable and the other a small, aluminium boat, had approached the bulker overnight on Sunday, possibly attempting to locate the drugs.

“There are evidently more people involved than the dead man," Superintendent Rob Critchlow of the New South Wales Police Force told local reporters. "As most people would realise, people don't scuba dive alone.” They were unsure why the operators of the boats had abandoned the diver and the drugs, possibly leaving him for dead or to die on the shore.