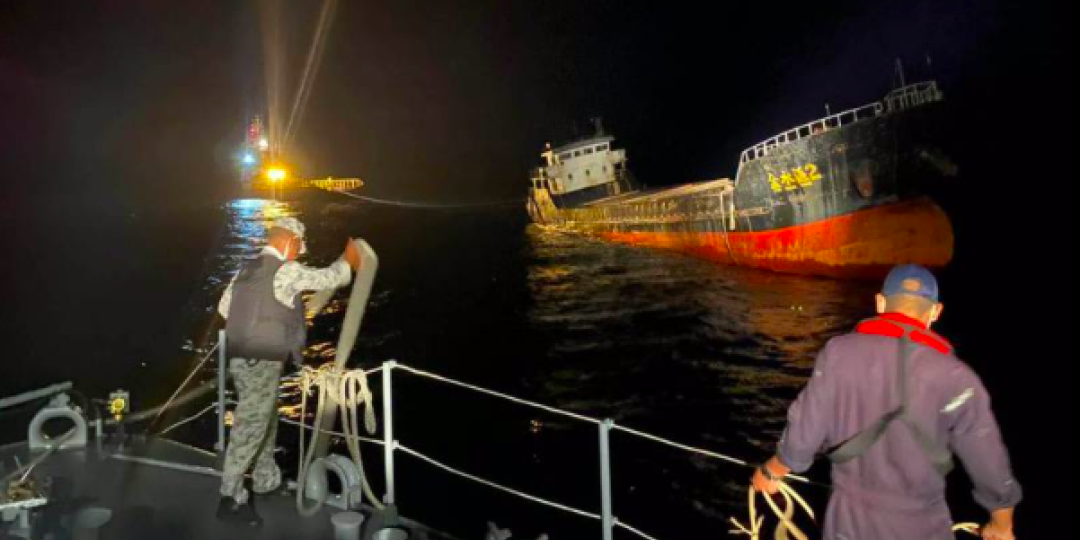 The Jin Shui Yuan 2 before it finally sunk.
0 Comments

A ‘ghost’ ship sighted drifting in the southern waters of the Gulf of Thailand eventually sunk off the coast in rough seas during a towing operation by the Thai Navy at the weekend.

The Bangkok Post reported that workers on duty at Chevron Corp’s offshore oil rig had first spotted the Chinese Jin Shui Yuan 2 vessel, of unknown origin, adrift about 100 nautical miles from the Songkhla shoreline on Thursday, January 6. Staff informed the local authorities who then alerted the 2nd Naval Area Command based in Songkhla of the incident.

The navy reported that the vessel’s anchor and nautical equipment had been found to be malfunctioning and there had been hardly sufficient charge in the ship's battery to keep the lights on.

Prathanworapanya told The Bangkok Post that the engine rooms had been submerged in water and there had been a strong smell of fuel. The authorities had needed to pump out nearly half of the water which the vessel had taken in before they could even attempt to tow it back to land.

He told the newspaper that the 2nd Naval Area Command had worked with Thai-MECC Region 2 to tow the abandoned vessel, which locals had dubbed "the ghost ship", to shore at Pak Nam Tapi, or the Tapi River mouth, in Muang district of Surat Thani.

“Strong winds upset the ship, causing it to flood and sink about 28 nautical miles from the shore of Nakhon Si Thammarat's Sichon district. Local fishermen have been warned to avoid sailing in the area of the sunken boat,” the newspaper reported.

Prathanworapany said that oil leaking from the vessel would be cleaned within three days to prevent it drifting into waters off popular tourist destinations, including Koh Madsum or Koh Mu in Surat Thani. He added that the authorities were assessing what the potential environmental risks of any attempt to raise the vessel might be.

“An initial examination on Friday found the 80-metre cargo ship had been abandoned and was severely damaged. There were no crew on board and all documents pertaining to the origin of ship were missing. According to a source in the navy, it is believed that the ship was not a victim of piracy but was intentionally abandoned due to the missing anchor and malfunctioning equipment. There have been no reports of pirates in the area,” the newspaper reported.