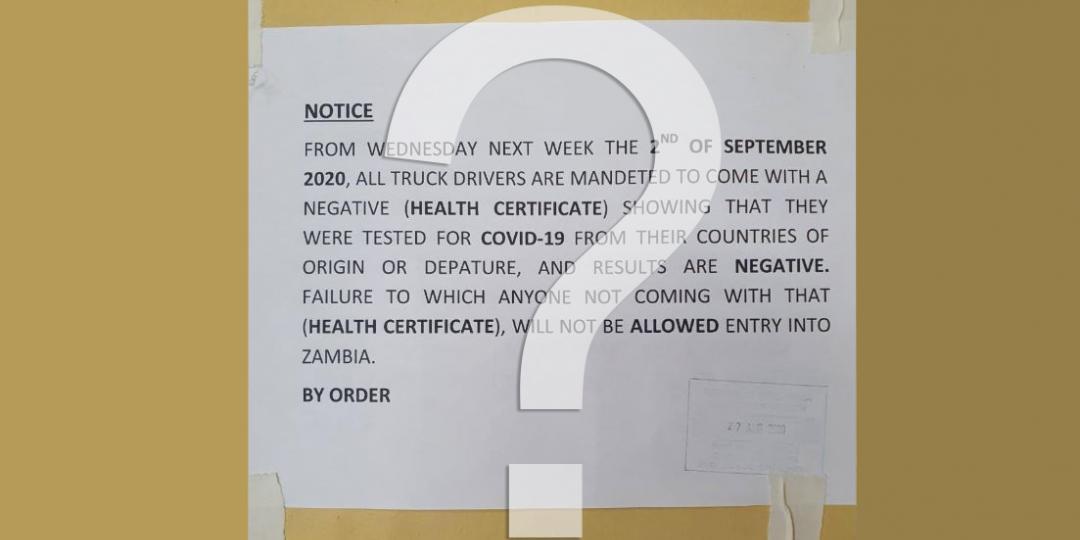 Cross-border transporters and the NGO striving to protect the sub-Saharan interests of long-distance drivers, Transit Assistance Bureau (Transist), are taking a strong stance against an announcement yesterday forcing South African drivers to abide by an SADC Covid-19 protocol.

According to the protocol, decided upon by the Southern African Development Community at the end of July, drivers will henceforth have to present laboratory certificates proving they have been tested for the coronavirus.

The certificates, which may not be older than 72 hours and are valid for 14 days, have sparked a fair amount of opposition from private sector logistics concerns, with many transporters complaining of not being consulted by either the SADC or any country officials representing health and/or transport officials.

When the protocol’s 1 September date arrived, Zambia was the only SADC partner to implement the determination, causing hauliers to ridicule the coronavirus-curbing measure as yet another case of the SADC talking about border harmonisation while practising the opposite.

Botswana, for that matter, indicated earlier that they would still be testing all drivers on entry to their territory, whether they could prove they were Covid negative because of a lab certificate or not.

As Zambia appeared to be the lone abiding SADC partner to implement the protocol, Transist members continued to express their vexation at the complete unresponsiveness from officials of other member countries about the contentious decision.

That was until yesterday when the SA Revenue Service (Sars) finally broke its silence.

In a shock announcement shared with Freight News and which will take effect from tomorrow, the tax authority said truck drivers would be required to present Covid-19 negative results upon departure from RSA and on arrival.

The statement by a Sars operations manager added that all positive truck drivers were to be handled as per the Department of Health Guidelines.

“All other health control measures are also applicable to truck drivers.”

The announcement has provoked the ire of Transist members, with one cross-border representative wanting to know: “What about drivers that are currently out of South Africa? Will they be able to come back from countries where the protocol is not implemented and testing is not mandatory for them?”

Questions are also being asked about the way Sars announced its decision.

“They have slipped this in via the back door. Surely there should be a grace period,” said the representative who requested not to be named.

Meanwhile questions are also being asked about the SADC’s thinking around the matter, especially about making the claim that the Covid protocol is one way of harmonising border crossing during the pandemic.

And while Transist has issued an appeal on behalf of drivers who may now find themselves on the wrong side of a Covid-curbing measure from tomorrow, the SADC Secretariat is yet to answer questions about the inharmonious way some members are abiding by its coronavirus protocol, and some not.