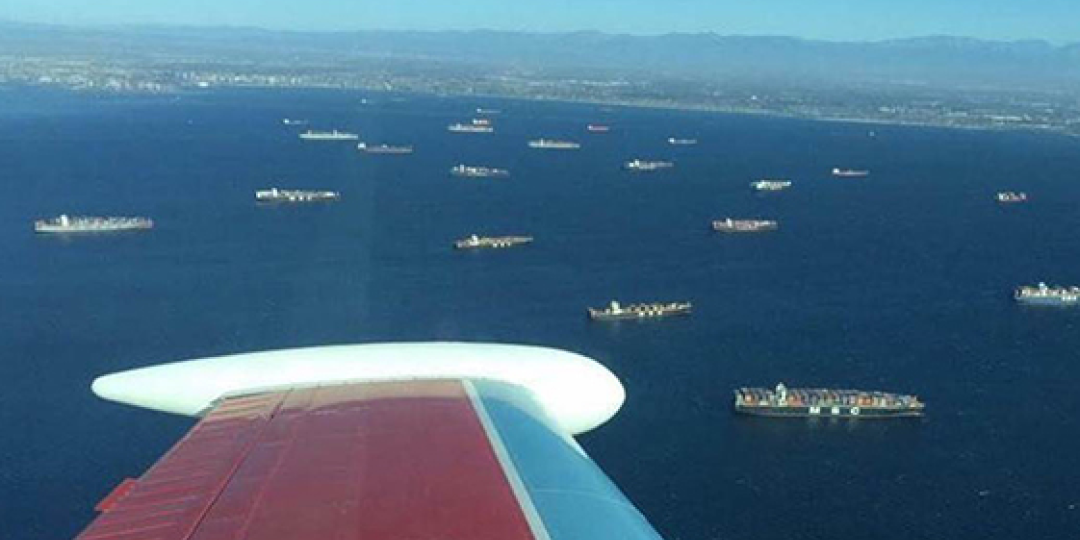 An earlier aerial photo of box ships waiting off the ports of Long Beach and LA, when the backlog was 19 and not 70. Source: JOC
0 Comments

The vessel build-up off America’s west coast now totals about 70 box ships, it was reported this morning, collectively representing a total capacity of 432 909 TEUs.

That is according to maritime magazine, American Shipper, assessing data received from the Marine Exchange of Southern California.

Looked at differently, it’s more than the entire inbound volume of cargo processed in August by the Port of Long Beach, one of the ports lagging behind the spike of Transpacific imports.

The other west coast lag point is the Port of Los Angeles.

The magnitude of the build-up gets added perspective considering that the TEUs currently at sea, waiting to be offloaded at the two ports, more or less equal what the eastern US port of Charleston handles in four months, and Savannah in two.

Looked at yet another way, the build-up is just under half the 839 118 TEUs that Long Beach and LA managed to offload in August.

Estimations are that if both ports operated at August’s pace it would take at least two weeks to clear the current backlog.

But the likelihood of that happening is nil, as the reawakening of the US economy has triggered a massive increase in imports from China, with a steady flow of vessels crossing the Pacific towards Long Beach and LA, MarineTraffic has confirmed.

On average, it takes a container ship at least nine days to berth at either one of the ports – an undesirable new record for Long Beach and LA.

Some vessels have to wait much longer, such as the AS Serafina, a 1 713-TEU, Liberia-flagged container ship that has been waiting at anchorage since August 25.