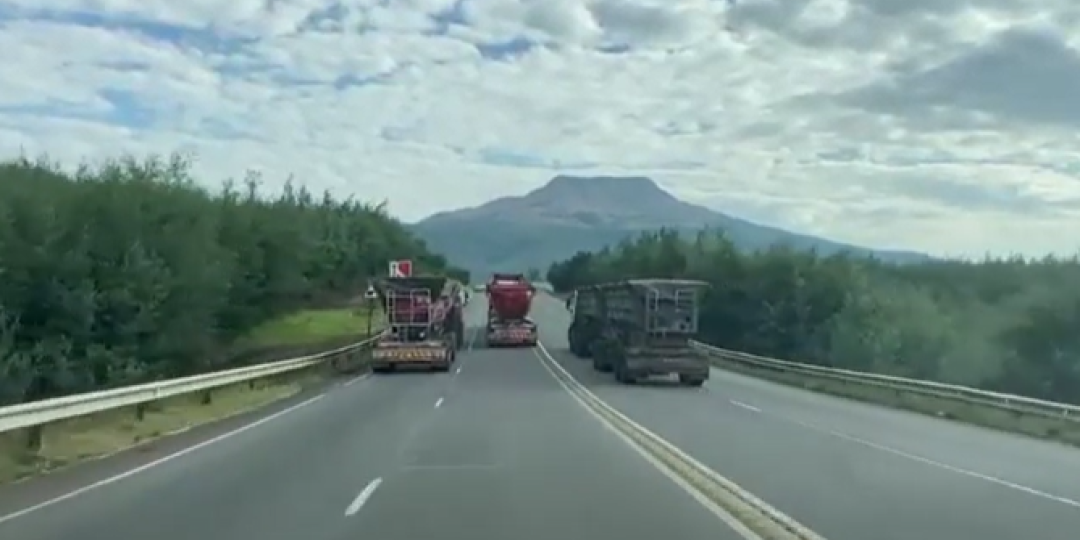 The driver in the truck on the far right has joined the ranks of the unemployed.
0 Comments

KwaZulu-Natal transporter Ni-Da Group has confirmed that the trucker responsible for dangerous driving in a tipper truck on the Majuba Pass stretch of the N11 south of Volksrust has been fired.

That’s according to Pieter Kwakernaak, operations director for the logistics company in Newcastle.

He said this morning that the driver had been immediately taken off the road after his arrest by police in Charlestown, and that a disciplinary process had been initiated by Ni-Da on Monday.

That process was completed on Wednesday, resulting in the immediate termination of the driver’s employment.

“We have a zero tolerance policy with regard to bad driving and cannot afford to be involved with a case of reckless and dangerous driving.”

Last Sunday and Monday the driver’s behaviour caused a stir on social media after a video was widely shared showing a tipper truck speeding and overtaking other trucks and traffic on blind bends.

At one stage the driver overtook two other trucks driving abreast on the dual carriageway.

The clip ends showing the driver barrelling between a pickup truck towing a trailer and oncoming traffic, including another truck, resulting in the trailer being bumped.

“It could have had catastrophic consequences,” Kwakernaak said.

The fate of the trucker, whose bad driving was outed by participants in a car making a video of the incident, was ironically also sealed through recorded content of his transgression.

“All our vehicles are fitted with three cameras,” Kwakernaak said.

He explained that everything was monitored to alert operations personnel on a need-to-know basis when drivers commit acts like speeding, cellphone handling while driving, or any non-adherence to Ni-Da’s code of conduct.

This is in keeping with what Road Freight Association CEO Gavin Kelly said on Friday - that the association expects all members to adhere to a Core Code aimed at governing safe and responsible road use.

“Reckless driving is completely unacceptable,” Kelly said. “More than 80% of all incidents on the road are due to human error.”

Kwakernaak said it was unfortunate that this had happened to the driver.

“He was vetted by all our pre-employment checks, had a clean record, and in the year or so that he had been with us, hadn’t been a cause for concern. We don’t know what led him to drive like that.”

Kwakernaak emphasised that although the incident had caught nationwide attention, Ni-Da would’ve anyway picked up the bad driving through their internal systems, and that the strongest action possible would’ve been taken against the driver.

Speculation that the empty coal tipper had suffered some sort of malfunctioning, such as failed brakes, was also dismissed.

“We established that there was nothing wrong with the truck – no mechanical issues were flagged,” Kwakernaak said.

Police were investigating a case of reckless driving, Kwakernaak confirmed.