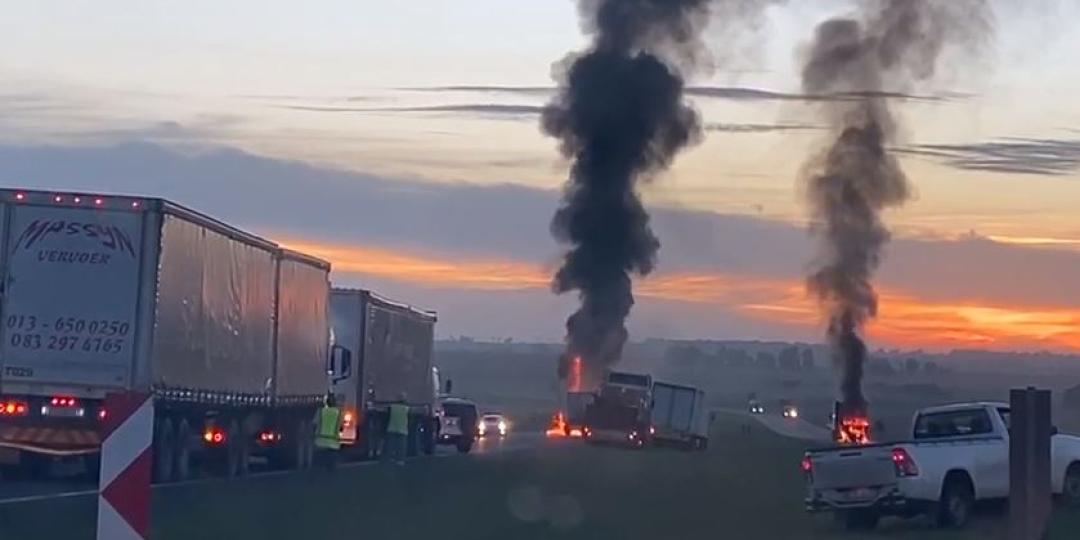 The scene on the N12 highway this morning where two trucks were petrol bombed. Source: Transist
0 Comments

The N12 highway north of the Kingsway bridge towards Springs and Daveyton was brought to a standstill early this morning when two trucks were petrol bombed in the ongoing spate of attacks by vigilantes on South Africa’s freight industry.

According to footage sent through by the Transit Assistance Bureau (Transist), one of the trucks belonged to distribution company Digistics, and the other to refrigeration and agricultural freight company, Hestony Transport.

A motorist who had to turn around and who recorded the burning trucks on his cellphone, said: “They have just set two vehicles alight on the N12 in the vicinity of Daveyton.

Last night Transist was also warned that traffic was being disrupted on the N17 near Carnival City.

Apparently rocks were placed on the road to obstruct traffic while tyres were also being set alight.

The motorist who sent through the voice clip said: “We literally drove past them as they petrol bombed the tyres.”

Earlier yesterday afternoon a video was also circulated by Transist showing traffic being diverted onto an offramp near Camperdown on the N3 in KwaZulu-Natal.

The person who recorded the video said: “They are burning two trucks.”

He added that it appeared one of the trucks had not reached the bridge and another was right at the bridge.

Since this morning’s arson attacks more than 30 trucks have been set alight since last Thursday evening’s surprise incidents of petrol bombing sparked a spate of violent vigilantism targeting transporters and their employees.

WATCH: Trucks burn on the N12 early this morning after both were petrol bombed by vigilantes 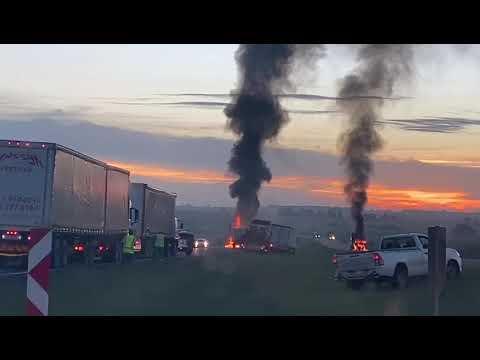