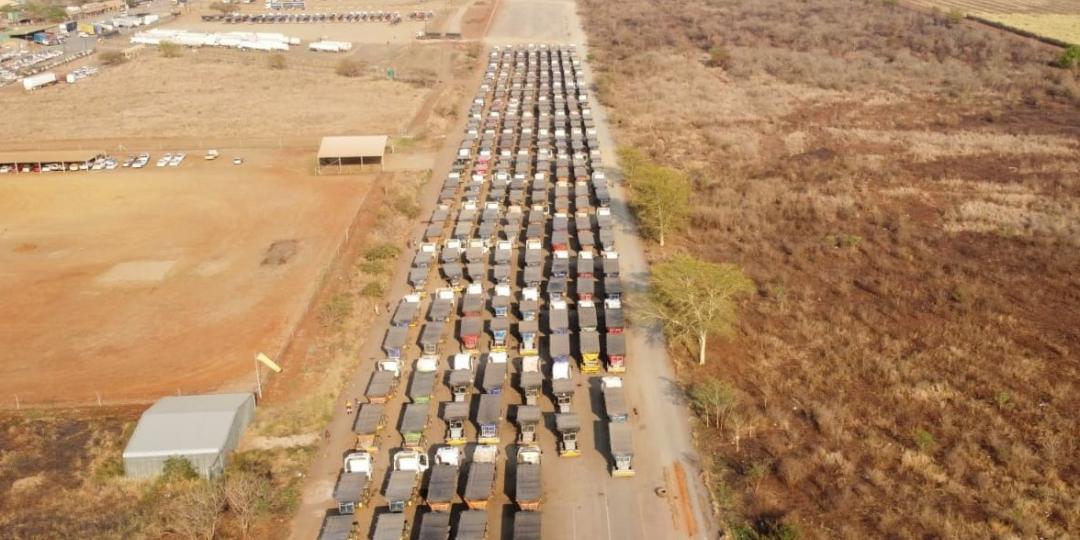 More than 170 trucks wait to be cleared at Kilometre Seven, the staging area at South Africa’s Lebombo border into Mozambique. Source: Fesarta
0 Comments

The SA Revenue Service (Sars) has denied that there’s anything unusual about the volume of truck traffic currently passing through South Africa’s primary crossing into Mozambique, despite private sector freight concerns appealing for customs and clearing to be speeded up.

In a written response to the Freight News initial “Border Beat” report on Tuesday (“Lebombo border clogged up as volume to Port of Maputo increases”), Sars said: “According to customs officials at Lebombo there is currently nothing out of the ordinary with traffic volumes at the border post.”

The revenue collector acknowledged though that there were certain peak days, with high volumes mainly from Wednesday to Saturdays when a lot of mining minerals were shipped to Maputo.

“However, we are currently operating at full capacity, processing an average of 700 to 850 trucks daily, and operating normal hours.”

Commenting on an aerial photograph sent to Sars in which the number of trucks sent to a staging area can clearly be seen, the revenue service said it was business as usual as trucks waited for finalisation of declarations before proceeding to the port.

The use of the old landing strip parking area known as “Kilometre Seven”, Sars added, was because of limited infrastructure at Lebombo which could only accommodate a certain number of trucks at a time.

“In the event of volume increases,” Sars said, “it could also be due to the fact that truck drivers are being screened for Covid-19 by the department of health before proceeding to customs, as well as various regulations that Mozambique officials have implemented recently due to the pandemic.”

Mike Fitzmaurice, chief executive of the Federation of East and Southern African Road Transport Associations (Fesarta), previously confirmed that customs at Ressano Garcia on the Mozambican side of the border had indeed been affected by a new tax instituted on all vehicles.

In respect of Sars’ response, he commented: “What they seem to think is that this is the norm and therefore it’s acceptable which it’s not.

“Just because something is the way it is doesn’t mean it’s efficient. They should be looking beyond what is happening at the moment to improve services and enable trade facilitation.”