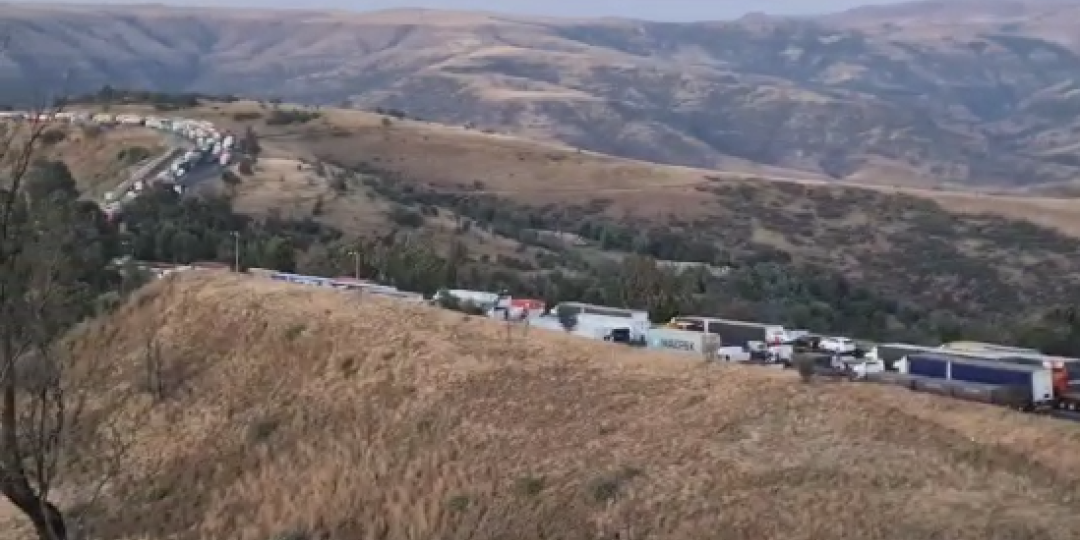 Trucks snake across Van Reenen's Pass during one of last week's incidents of illegal truck driver protests on the N3. Source: RFA
0 Comments

Business, labour and government have signed an agreement to work together to put an end to truck blockades on the country’s major road freight routes, Transport Minister, Fikile Mbalula, announced on Monday.

Mbalula highlighted the outcome of his department’s lengthy meetings with the logistics sector, which started on Sunday, on his Twitter account on Monday.

“Today we all signed an agreement with business and labour. Together, we committed to work on issues raised and to put an end to the blockages on our roads,” he tweeted, sharing a page of the agreement in his feed.

Road Freight Association CEO, Gavin Kelly, said the organisation “agrees with, and supports, the implementation plan”. However, he said the RFA had rejected point 11 of the plan, which aimed to introduce archaic ‘operator permits’ similar to taxi operator licences.

“We have informed the ministers clearly that we reject that provision totally and made it clear in the press briefing. This is also verified in the press statement by the Minister of Employment and Labour.

He said the RFA had been part of the Ministerial Task Team set up to deal with regulation of the sector since its inception and its first meeting in KwaZulu Natal.

“The compliance of employers in the transport sector with all regulatory requirements, is non-negotiable. There are both companies and so-called representative organisations within the road freight sector who refuse to comply with the basic requirements of the Labour Relations Act or the Main Agreement within the sector,” Kelly said.

However, he said that the proposed concept that a private institution could create a government agency to "regulate" the freight industry was unacceptable.

“The idea to bring back the archaic route and distance ‘operator licences’ that existed before the ‘deregulation of road freight’ in the 1980s, and propose the implementation of a taxi industry-style operator licence, shows both a total lack of understanding of how the freight and logistics sector operates, as well as a hidden attempt to capture the industry,” said Kelly.

“The various authorities that are responsible for registration and regulation of operators in the sector are mandated and empowered to perform these functions, without the need to further burden the citizenry with another expensive yet ineffective agency.”

Kelly said the RFA supported all efforts to stop the disruption of the logistics chain.

“The root causes have been identified, and the proposed implementation plan clearly identifies who, what, when and how these causes must be addressed and resolved. The RFA calls on the various authorities tasked with registration, confirmation of compliance and the monitoring of adherence to the conditions of employment prescribed for the road freight sector, to apply themselves urgently to their tasks.”

He said this would resolve the base causes for the protests by the All Truck Drivers Forum and Allied South Africa (ATDF-SA) and the illegal employment foreigners who do not have work visas.

The signing of the agreement follows the latest truck blockade protest, during which scores of trucks blocked the N3 in the Free State and KwaZulu Natal from Van Reenen’s Pass on Thursday. ATDF-SA distanced itself from the protest, although it took responsibility for an earlier protest near Warden last Tuesday.