Breadbox Shipping Lines has added three new vessels to its f leet.According to Yusuf Yusufoglu, trade manager, multipurpose parcel service, the Breadbox Warthog is an 8.300-DWT tweendecker with 2 x 45-ton cranes, while the Breadbox Viper, a 3.200-DWT gearless single decker, is fully fitted for IMO cargoes. The Breadbox Oryx is a 7.700-DWT tweendecker with 2 x 60-ton cranes that has been added to the fleet on a long-term period char ter. “The new vessels will help strengthen our service from the north continent and Mediterranean to West Africa,” he said. “Both new vessels will also be fitted for safe trading within the Gulf of Guinea, which unfortunately remains an area with a much-increased threat of piracy.”He said they continued to see an increase in activity from Europe to East Africa and were following developments in Mozambique closely. “We recently performed our first parcel sailing from Europe to Mozambique with cargo for the Afungi project, and we expect more sailings in the near future.”Yusufoglu said shipping companies active in the multi-purpose/breakbulk sectors were continuing to consolidate. “This is not only in the form of mergers or takeovers but also with companies who are operating joint services and schedules. We also see that more and more companies are extending their services out of their “traditional” trading areas, and looking for new and less-saturated markets.”Breadbox, since its inception in 2001, has worked hard to establish its African footprint and has a particularly strong presence in West Africa.“This is due to the unique combination of services that we offer – including a reefer/multipurpose and breakbulk service as well as the f leet of coastal vessels that trade within the region,” he said. “We are watching developments in East Africa carefully as we believe we are in a good position to extend our services to these new markets.”Diversifying was incredibly important, considering the slow start of the year for cargo into West Africa, said Yusufoglu. “The cargo that we have seen moving, and are shipping ourselves, is mostly part of supply contracts mainly for the mining industry – particularly into Mauritania, Senegal, Mali, Guinea and Ghana.”He said as part of its Europe-West Africa service, Breadbox continued to deploy on average three ships per month, servicing all these countries on a semi-liner basis. Outside of the shipments for the mining industry, the main increase in shipment requests was out of the Mediterranean, particularly for project and breakbulk cargoes. “We expect the frequency of our new service from the Mediterranean to West Africa, which is currently operating with monthly sailings, to also increase in the near future.”Yusufoglu said in recent months there had also been a spike in requests originating from South Africa to West Africa, the North of Europe, and the Mediterranean, particularly for demobilisation projects and IMO cargoes for the mining industry. Despite the volatility of the current market, the expectation for the freight market was positive.“We believe it will get stronger in the years to come. Mining activity in Africa is continuing to grow, with vast amounts of foreign investments into West, South and East Africa, which will also increase the requirement for supply contracts feeding these operations – often originating from Europe and the Mediterranean. If the oil price continues increasing, we will also start seeing an increase in activity in the oil and gas sector, particularly in Ghana, Nigeria and Angola.”Yusufoglu said like many sectors, shipping and logistics were plagued with challenges caused by the pandemic. Travel restrictions and curfews had resulted in slower port operations, which in turn were creating some congestion and delays.“All of the volatility and challenges we are experiencing, however, create opportunity for companies who are able to quickly adapt to the new market environment. We are seeing a stronger freight market within Europe and the Mediterranean trade, and within the short sea trading routes, which all bodes well for the future.”We recently performed our first parcel sailing from Europe to Mozambique with cargo for the Afungi project, and we expect more sailings in the near future.– Yusuf Yusufoglu “ 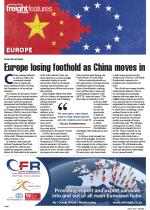