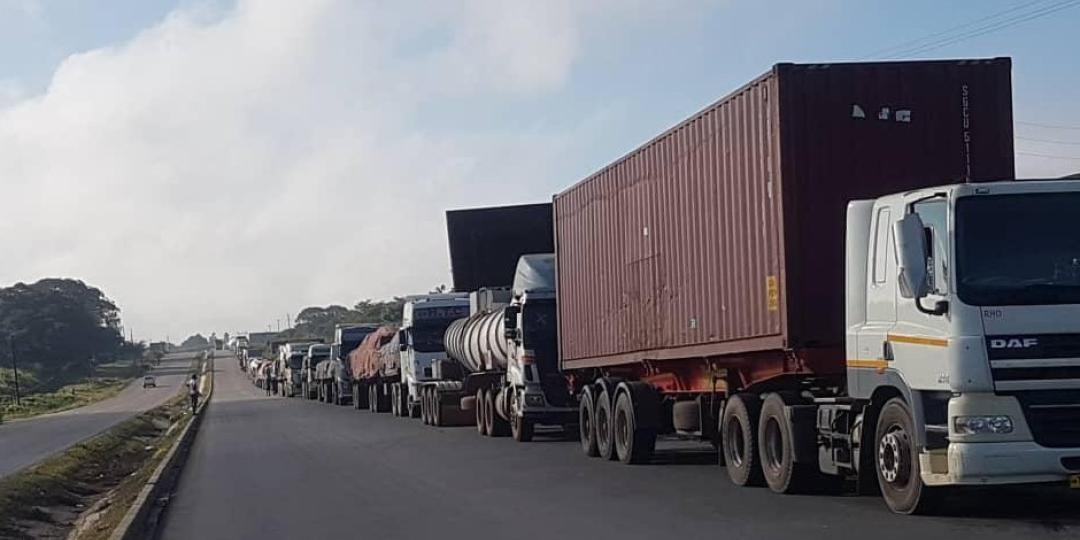 Trucks queueing towards Chingola on the route north towards Zambia’s Kasumbalesa border with the DRC.
0 Comments

Trucks heading south out of the Democratic Republic of the Congo (DRC) use local help to navigate their way around rain-filled potholes on a stretch of road from Mokambo in the DRC to Mufulira south of the border – that’s how bad roads in Zambia’s Copperbelt Province are.

According to a long-haul fuel trucker serving copper mines in the DRC’s Haut-Katanga province, “boys pile out of the bush, and for a couple of kwacha, show trucks how to drive.

“They point out where the bad spots are, and when they go halfway into a hole, drivers know they should rather go around than try and drive through.”

So treacherous is this stretch of road past a village called Murundi, a truck recently overturned, forcing police to bushwhack a way for traffic through the thicket without making sure it was passable.

The transporter told Freight News that for all its good intentions, it only presented drivers with yet more logistical headaches as they got stuck in the mud.

For some time the home haul out of the DRC has prompted operators to ask why they can’t continue further south to Sakania from Mokambo, where a relatively short stretch of road across the border can take them onto Ndola in Zambia.

The DRC though insists that the Sakania transit be used exclusively for loaded trips.

“Which is hard to see why,” the transporter said.

“We leave our electronic seals at Kasumbalesa, [the main Copperbelt border further north of Mokambo], so literally all they have to do is stamp the passports of drivers going south.”

In the meantime, tollgates are being constructed on that stretch of road, giving transporters hope that Sakania may very well still become an option for empty trips out of the DRC.

That’s how desperate operators working on the north-south corridor into the Copperbelt are – willing to pay even more to use a road network that often falls woefully short of workable road freight efficiency.

Zambia, for one, has stuck to its guns that “atrocious road conditions” – as claimed by the transporter – are not responsible for trucks queueing south of the Kasumbalesa border.

On Friday it was reported that the build-up of trucks on Zambia’s side and post of the border was because of drivers not wanting to get vaccinated for Covid-19 and insisting on taking the polymerase chain reaction (PCR) test.

The Federation of East and Southern African Road Transport Associations said the PCR tests delayed traffic going north as it took time for results to be released, and by the time drivers could proceed, the three-day validity period of the tests had expired.

It means drivers had to be retested once in the DRC, “adding to an already congested situation”, the association’s Kage Barnett said.

Whatever the case may be, the queue north to the border was this morning still around 45 kilometres long, stretching all the way from Kasumbalesa past Chililabombwe to Chingola.

At least corridor operators received some good news over the weekend when the southernmost crossing of Beitbridge reopened following a water-supply problem.

With all the intermittent snags on the corridor, the bulk liquid transporter told Freight News it had taken up to two weeks and more to complete a rotation of about 4 600 kilometres into Lubumbashi in the DRC and back.

He explained that it used to be that a truck could get to Kitwe in Zambia in four days, spend another to drive to Lubumbashi, offload and return to Kitwa, and then take another four days to get home.

“From Sasolburg to Lubumbashi would take us nine days, ten days max. We would budget for ten days and a trip would take 11, maybe 12 days if there were any delays.

“Now we get excited if we complete a trip in 12 days. Ordinarily it takes 14 to 15 days - and that’s when our drivers are pushing hard against the clock.”

He added that fixing roads such as the dirt track between Mokambo-Mufulira would be of great benefit to cross-border hauliers on the north-south corridor who, out of necessity, had no alternative other than transiting through Zambia.

And yet Zambia, for all the revenue generated by being the continent’s most tolled country, claims it doesn’t have the money to tar roads such as the one that is the only way out for southbound transporters leaving the DRC.

“Apparently they haven’t got funds to fix their roads, but if you think of the amount of money they make off transporters, it’s hard to believe. We pay about 118 kwacha (R98) in road tariffs, and another 150 (R125) at every tollgate.”

From Zambia’s border post of Chirundu in the south with Zimbabwe to Kasumbalesa in the north, Freight News counted six toll gates on the T2 and T3 highways.

“It’s not as if we don’t pay,” the transporter said.

“You want to tell me they can’t do something about the state of the roads.”