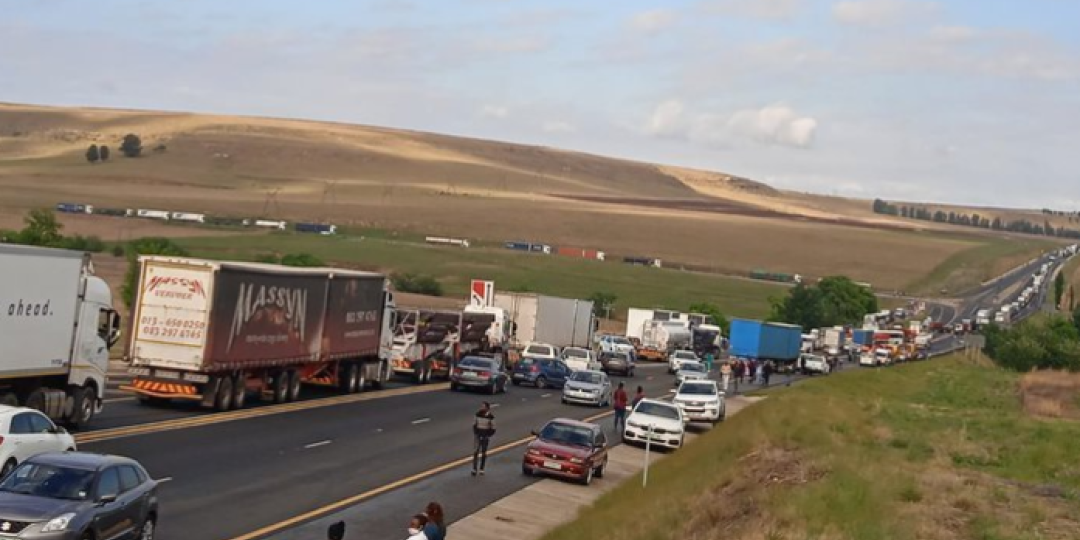 Twelve truck drivers are expected to appear in the Ladysmith Magistrate’s Court today after they were arrested on Friday for using their rigs to obstruct traffic on South Africa’s N3 highway south of Harrismith.

The drivers removed their keys and left their trucks from about 3am, ignoring police instructions to remove their rigs.

Video footage showed several trucks of varying capacity and use parked side by side across the highway.

The blockade brought movement on both sides of the highway to a complete standstill, forcing traffic to be diverted onto alternative routes such as the N11.

The arrested drivers were charged with contravention of the Criminal Law Amendment Act.

More specifically, they will be tried for infrastructure contravention, intimidation, economic sabotage, and contravention of the Road Traffic Act.

Wide condemnation has since been expressed over the impact of Friday’s blockade, with Durban Chamber of Commerce CEO Phalesa Phili saying losses of about R800 million a day are lost when the country’s most important supply artery is affected in this manner.

Economist Mike Schussler said it was very bad for South Africa’s image as a key partner for intra-African trade, especially in light of the African Continental Free Trade Area.

He said it made the country seem uncooperative, as if it wants to work in isolation and not contribute to the benefit of other African countries.

Economist Piet Croucamp told The Citizen that it created distrust in the logistical capability of the country.

“Market economy is based on the principle of trust, confidence that you will deliver goods and services in a certain time.”

This morning Gavin Kelly, CEO of the Road Freight Association, said the issue over foreign national drivers who were allegedly working in South Africa’s transport sector illegally was nothing new.

He said it had been evident for at least three years that there were a few companies who were contravening labour laws, and that it was time for the relevant government departments to take action.