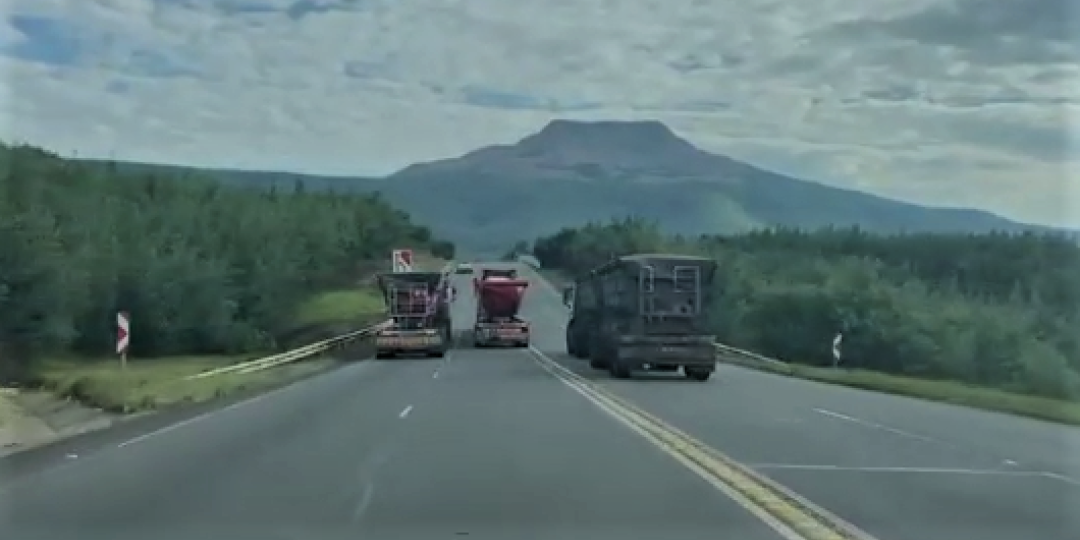 In this screen grab from the video about bad trucking behaviour over the weekend, the tipper can clearly be seen using the oncoming lane to overtake two other tippers driving abreast on the right side of the dual carriageway.
0 Comments

Social media is abuzz this morning with what is clearly a case of very bad driver behaviour captured on video on what is presumably the N11 in the vicinity of Majuba Hill, northern KwaZulu-Natal.

The clip, recorded on Saturday morning just after nine, shows a tipper truck speeding past other tippers, often veering well into the oncoming lane of the winding road.

At one stage the truck even overtakes two other tippers driving abreast on the dual carriage highway - on a blind turn no less.

Towards the end of the video the truck dangerously rears up on a pickup truck towing a trailer, bumping the trailer out of its way as it passes between the bakkie and oncoming trucks.

The driver of the pickup, clearly rattled by the incident, pulls off the side of the road before the reckless driver disappears round a bend.

That the truck driver’s dangerous driving didn’t result in a serious accident is a miracle of sorts.

Shared multiple times via social media, the clip made for high-profile coverage on a prominent radio station this morning, emphasising the seriousness with which such trucking behaviour is viewed.

There’s also been plenty of debate about the truck’s brakes, whether they failed or not.

However, if one looks carefully at how the truck is speeding, the driver seems to be clearly at fault.

Reports are that the driver was arrested by police in Charlestown south of Volksrust, and that further investigations are already under way.

This could not be confirmed though.

Approached for comment, Gavin Kelly of the Road Freight Association said: “Any reckless and or negligent behaviour is unacceptable.

“We do not know the circumstances here – neither do those who filmed the event.

“Any form of driver behaviour that endangers other road users is unacceptable. More than 80% of all incidents on the road are due to human error.”

The association’s chief executive also said that members of the RFA were required to adhere to the Core Code, which included incident management and implementing the RTQS (Road Transport Quality System).

“This requires tight control of drivers, their training and refresher training, the management of incidents and corrective measures to prevent such incidents, and the progressive change of driver behaviour into safer and more efficient driving.”

Kelly reiterated that the RFA “cannot state more clearly that this sort of driving behaviour is not acceptable.

“Should this be a member (which has not been determined as yet) – then the RFA requires that the necessary steps are taken in terms of fleet driver management.

“The law also needs to take its course.”

Freight News has since established that the truck, registration number KCY 465 MP, is operated by a well-known transport company in Newcastle.

Efforts to reach the owner of the company have thus far been unsuccessful.

Kelly emphasised that the RFA has complaint section on its website and callers can leave details of bad driver behaviour when phoning in.

“In terms of our Core Code – we require members to take the necessary steps to address the situation and to report as much to us about what has been done.”

He confirmed that the Newcastle transporter was an RFA member.

This is a developing story and the company in question will be given time to respond before any further information is revealed.