On 19 November 2021, the Deputy Minister of Trade, Industry and Competition committed the government to facilitating strong cooperation between all three tiers of government to fast-track progress in the operation of the OR Tambo International Airport Special Economic Zone (ORTIA SEZ).

Deputy Minister Majola visited the SEZ leading a delegation of senior officials from the Department of Trade, Industry and Competition (the dtic) and the Gauteng government, to discuss operations with the leadership of the Gauteng Industrial Development Zone (GIDZ), which is currently tasked with setting up the SEZ.

The ORTIA SEZ is one of the first Special Economic Zones (SEZs) linked to a port of entry that formed part of the SEZ programme of the government in the early 2000s. This was to support efforts of companies that produce products that would have to move via air freight. Initially allocated 7.5ha in the northern part of the airport, the SEZ has grown incrementally in size, with an additional 29ha of land to the north of the R21 and a further 13.9ha next to the Impala Platinum Refinery in Springs Ekurhuleni. This in effect established three operational precincts of the SEZ. There are efforts to secure more land in Ekurhuleni for industrial development to support the full implementation of the city’s Aerotropolis Strategy.

Majola expressed concern at the pace at which operations were unfolding and has undertaken to bring on board key stakeholders from the Gauteng government, Airports Company South Africa and the Ekurhuleni Metropolitan Municipality as soon as possible to assist in dealing with the challenges brought forward by the leadership of the SEZ.

Acting CEO of the SEZ indicated that some of the critical challenges they were facing included providing adequate bulk infrastructure to secure investments. In addition, she highlighted that they were working hard to address some of their capacity and financial constraints. However, there has been progress made over the past couple of years.

In spite of the challenges faced, 13 investors have been secured, three of them are already operating from precinct one of the SEZ. One of the three companies is In2Food, which is a food packaging company contracted to Woolworths. In2Food started operations at precinct 1 in 2019, bringing an investment of R257 million, while also creating over 2200 direct jobs. The development also provided support opportunities to six emerging farmers, five of which are black owned, and funded through the company’s support programme.

Metal Concentrators is a South African refinery producer which started its operations this year. The company has invested R102 million in support of its operations at the SEZ. Over 50% of the staff complement is made up of women. 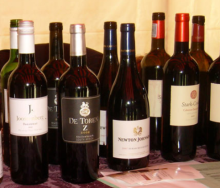 The UK market has been very supportive of South Africa’s wine industry during one of the toughest times it has ever faced.