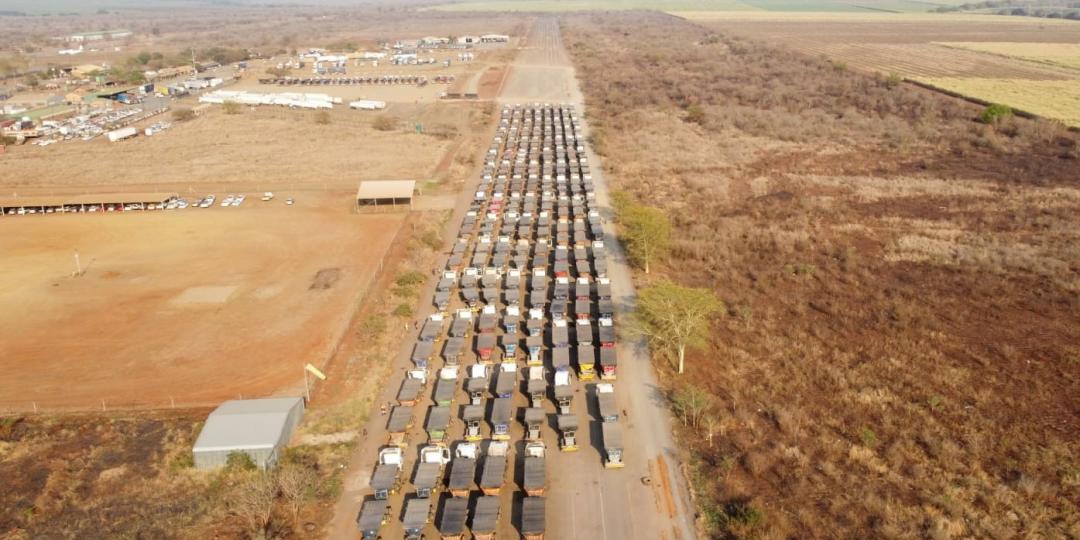 In this aerial photo chrome trucks staged at an area called “Kilometre Seven” wait to pass through the congesting border crossing of Lebombo from South Africa into Mozambique. Source: Fesarta
0 Comments

An old problem at South Africa’s Lebombo border into Mozambique, cargo clearance not keeping pace with incoming loads heading towards the Port of Maputo, is getting worse - with volumes lately exceeding those of Beitbridge, the notoriously congested northern crossing into Zimbabwe.

According to Mike Fitzmaurice, chief executive of the Federation of East and South African Road Transport Associations (Fesarta), build-up on the border has gone up to around 900 trucks a day.

Such is the volume that the truck park for Lebombo can’t handle the number of rigs anymore, with transporters, especially those carrying chrome, being diverted to an old landing strip nearby known as “Kilometre Seven”.

Fitzmaurice explained that the truck park was really meant for general cargo and there simply wasn’t enough space to cope with the volume of chrome exports coming through from Steelpoort in Mpumalanga.

In aerial photographs made available by Fesarta, the build-up is evidently very bad, with ore trucks simply not passing through fast enough from the pop-up staging area of Kilometre Seven to its equivalent on the Mozambican side, Kilometre Four.

Long-standing cargo clearing inefficiencies between the two areas, including passing through the various check-point gates, have also been exacerbated by a new tax implemented by customs at Ressano Garcia on the other side of the border.

“This has become another complication,” said Fitzmaurice.

“Mozambique is now taxing actual vehicles and they are collecting this fee (said to be about R130) at one of the gates between Kilometre Seven and Kilometre Four. Drivers have to pay in cash and it takes up to 10 to 15 minutes for this to happen, adding yet more delays on top of existing congestion.”

Fitzmaurice, who also works as a one-stop border post consultant for crossings throughout the sub-Saharan region, said the most obvious solution to the problem would be to open the border on a 24-hour seven-days-a-week basis.

He added that Fesarta had approached the SA Revenue Service (Sars) to assist but hadn’t yet heard from Sars.

Freight News this morning sent through questions to the tax authority about customs issues holding up freight flow at the border, especially what is being done to alleviate congestion.