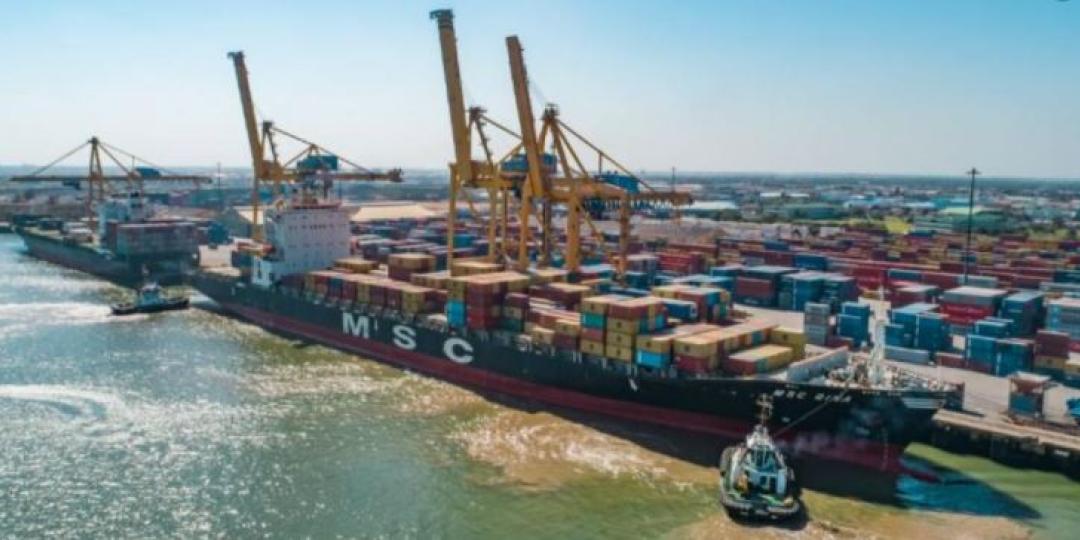 With yet another tropical cyclone heading straight for the Port of Beira, operations have been placed on hold with prevention measures including gantrey cranes getting strapped down. Source: MSC
0 Comments

Contrary to initial trajectory forecasts, the tropical cyclone (TC) that entered the Mozambican Channel last night after it had passed over the north-western Melaky region of Madagascar, appears to be heading straight for the Port of Beira.

Initially it was thought that Cyclone Eloise would be passing south of the port, making landfall in the vicinity of Vilankulos, more than 500 kilometres south of Beira.

However, yesterday, Jan de Vries, chief executive of port concession company Cornelder de Moçambique, said: “The cyclone is expected to land on top of us again, and not any more near Vilankulos.”

He added that it seemed that Eloise would follow the coast in a southerly direction once it had reached Beira.

Although the cyclone slowed to around 35 knots or 65 kilometres an hour as it dissipated while moving across Madagascar, its speed by the time it reaches Mozambique’s coast this evening is estimated to be about 140 kilometres an hour.

The US Navy’s Joint Typhoon Warning Centre is forecasting Eloise as a “high” or red TC event, with likely impact on land within the next 24 hours.

De Vries told Freight News this morning that the wind was already picking up and it was raining heavily.

“We’re finalising port preparations and by midday we will be ready for whatever comes.”

He added that Eloise was not expected to be as strong as Idai, the cyclone that devastated the port in March 2019 and claimed the lives of about 1300 people as it destroyed homes and infrastructure on its path towards Zimbabwe.

“With improvements we made after Idai we don’t expect the port to suffer much. Our prayers are more with the general population.”

Warnings that Eloise would regain the intensity it had lost over Madagascar as it moved south-east over Juan de Nova Island towards Beira, were also expressed by Mussa Mustafa, general director of the National Meteorology Institute.

He told Radio Mozambique that “the epicentre of the storm is in the channel where the temperature of the surface waters is very warm, and this ensures that it will intensify”.

He added that the provinces of Sofala and Inhambane were expected to be hit the hardest by Eloise.