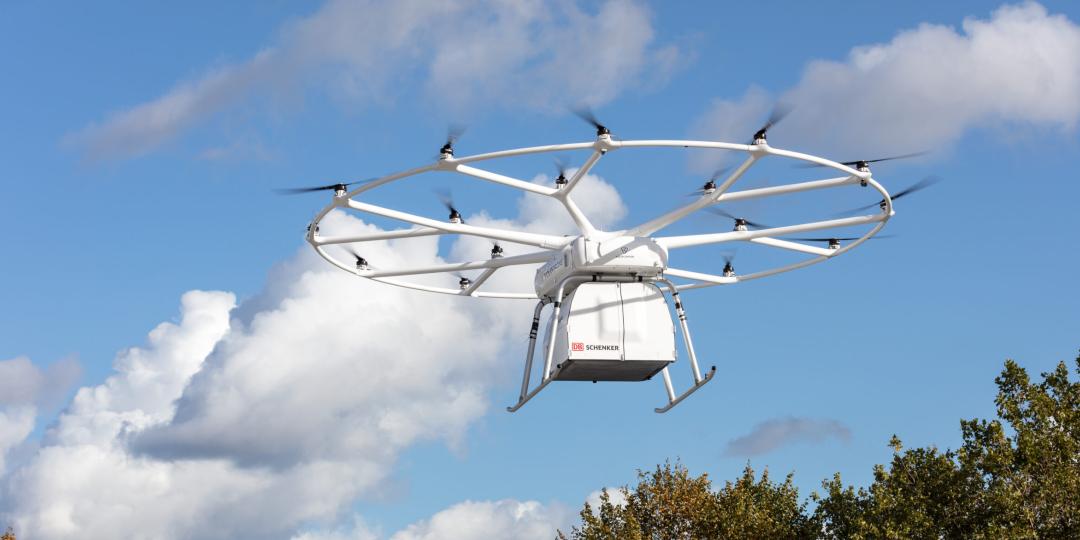 Last week saw the launch of the first fully electric cargo drone, designed to carry any of the six International Organization for Standardization (ISO) pallet sizes, with a weight up to 200 kilograms, over a 40-kilometre range.

A pioneer in urban air mobility, Volocopter has partnered with DB Schenker and demonstrated the seamless integration of its ‘Volodrone’ into the logistics system during a three-minute test flight at last week’s ITS World Congress 2021.

The drone took off at 15h02 from homePORT Hamburg, and reached a maximum altitude of 22 metres.

For this delivery simulation, the electric heavy-lift utility drone was equipped with a load-box in between its landing gear.

First, the demonstration teams secured a Euro-pallet- sized load to the box under the VoloDrone, and this was followed by a smooth take-off.

The aircraft then brought the payload to a DB Schenker Cargo Bike and landed it safely.

Once the payload had been successfully transferred, the Cargo Bike delivered its cargo to the final destination under the area’s park deck, marking the completion of the entirely electric, multimodal last mile

“We are the only UAM company offering solutions for passengers and goods that are flying fully scaled and publicly around the world,” said Volocopter CEO Florian Reuter.

This electrical vertical take-off and landing (eVTOL) aircraft is aimed to serve challenging missions across diverse industries. The VoloDrone is part of Volocopter’s UAM aircraft portfolio for transporting passengers and goods in cities - and is positioned to be deployed where conventional transport options reach their limits.

The VoloDrone’s first flight took place in 2019. Since then, regular flight tests have been conducted at various airfields in Germany. The drone itself is 9.15 metres in diameter, 2.15 metres tall, and has a 600-kilogram maximum take-off weight (MTOW).

“With the first public flight of the VoloDrone in Hamburg, Volocopter and DB Schenker demonstrated how drone operations can extend the existing logistics infrastructure for land or sea transport to create entirely new supply chains and transport routes,” Reuter said.