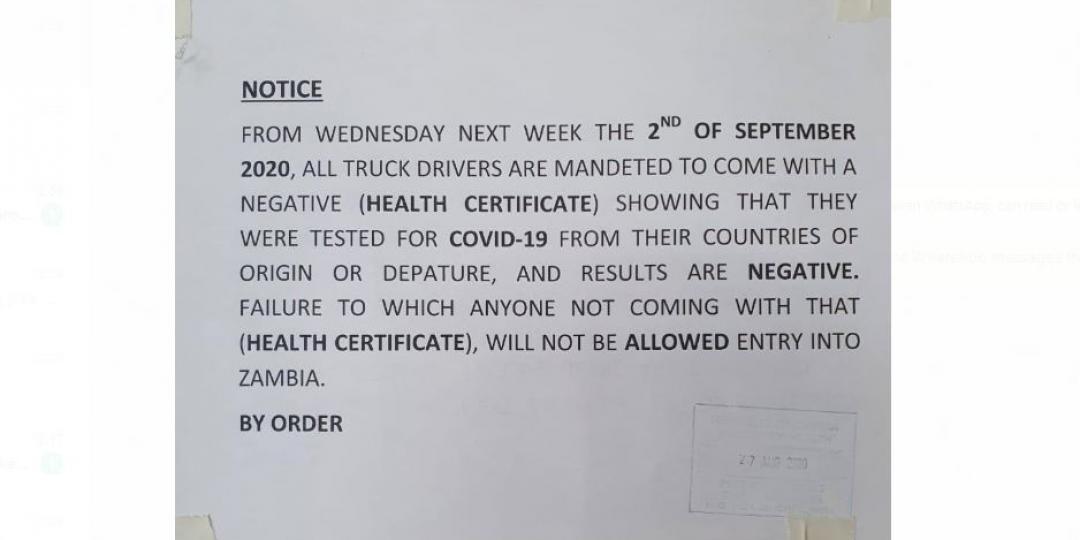 The sign that went up at Chirundu Border Post recently, warning truck drivers to prove that they're Covid-19 negative.
0 Comments

Say about Africa what you want but it’s never boring.

Yesterday afternoon, as transporters were heading into a Covid-19 restriction that would have made it compulsory for truck drivers to furnish Zambian border authorities with medical certificates declaring their Covid-19 status, an about-face by authorities in Lusaka was suddenly on the cards.

At least that’s what it seemed.

This transpired after a member on the Transit Assistance (Transist) WhatsApp group asked whether any transporter could divulge contact details of the person who had put up the notices at the border between Zambia and Zimbabwe.

The message read: “Is there anyone with a Zambia Chirundu runner who can find out a telephone number of the person that put the stickers up about the health certificates at ZRA (Zambia Revenue Authority) windows?

“The Min of Health needs a contact. Urgent thanks.”

Unsurprisingly the restriction, previously reported to be an inflexible attempt by the Zambian Ministry of Health (MoH) to curb infection imported into the country by unwitting truck drivers, was bizarrely revoked.

It led a Transist member to say: “It’s utter confusion at the moment. Nobody at MoH seems to know what’s going on. We’re trying to get clarity.”

Moments later, another Transist member said: “From the look of things I doubt it will be implemented tomorrow.”

The same person, who regularly works as a logistics consultant on the North-South Corridor (NSC) into the Copperbelt, minutes later confirmed that ZRA officials at Chirundu had confirmed that the Covid-19 certificate requirement would not go ahead for now.

Perhaps a case of back-pedalling from authorities in Lusaka, having realised that the restriction is impractical?

Maybe, but transporters should be so lucky.

Most likely it’s just a delay of sorts on a corridor renowned for hold-ups and hokum from the corridors of power.