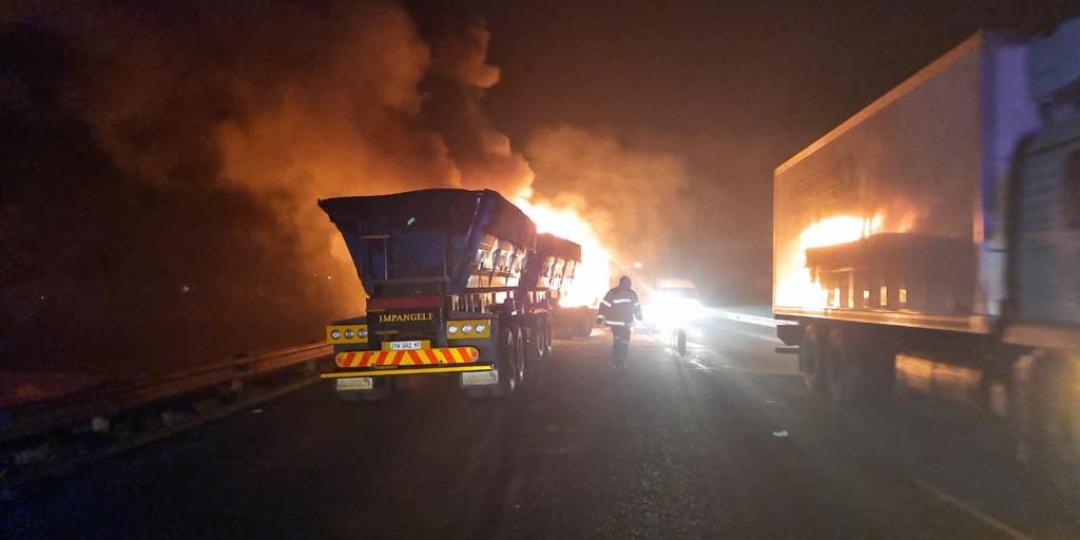 One of the coal tippers that were set alight outside Ermelo last night, presumably by arsonists loyal to Jacob Zuma.
0 Comments

Two coal-carrying tippers were firebombed and their drivers allegedly assaulted on the N17 between Ermelo and Piet Retief last night, presumably by protesters fomenting resistance to developments around the ongoing court appearances of Jacob Zuma.

The attacks happened on the same day as it emerged that a judge had ruled that the beleaguered former president, currently languishing in jail, would be allowed to attend the commencement of his own trial on long-standing charges of corruption and racketeering.

Previously it had been ruled that Zuma would have to attend proceedings virtually from the correctional facility in Estcourt where he has been incarcerated.

Now, with tension yet again mounting in the run-up to next week's court appearance, the logistics industry is once more finding itself in the crosshairs of Zuma's supporters - especially after last night's arson attacks.

As a result, transporters and truck drivers have been warned to proceed with extreme caution on the following roads: the N3 into KwaZulu-Natal (KZN), especially around the Mooiriver Toll Plaza; the N2 through Durban, particularly around Umlazi and heading north towards Richards Bay; the N17 through Mpumalanga towards the N2 north at Pongola; the N12 out of Gauteng heading towards the N4 towards Witbank/Emalahleni; and the R59 between Alberton and Vereeniging.

Commenting on last night's events near Ermelo, Mike Fitzmaurice, chief executive of the Federation of East and Southern African Road Transport Associations, said it certainly seemed that tension was building up as Zuma's next date with prosecution drew nearer.

Not for the first time has the logistics industry in South Arica found itself targeted by supporters loyal to Zuma.

As was seen during the recent insurrectionist violence in KZN, the country was plunged into a civil war situation because of Zuma's imprisonment.

Asked whether transporters should consider finding safety in numbers by driving in convoy, with security personnel escorting them, Fitzmaurice said it was very difficult to arrange.

"They have different pick-up and delivery times and, although it's possible and probably should be done, it's a logistically complex thing to do."

Needless to say, transporters are holding their breath in anticipation of another firestorm for which this time the government is hopefully prepared.