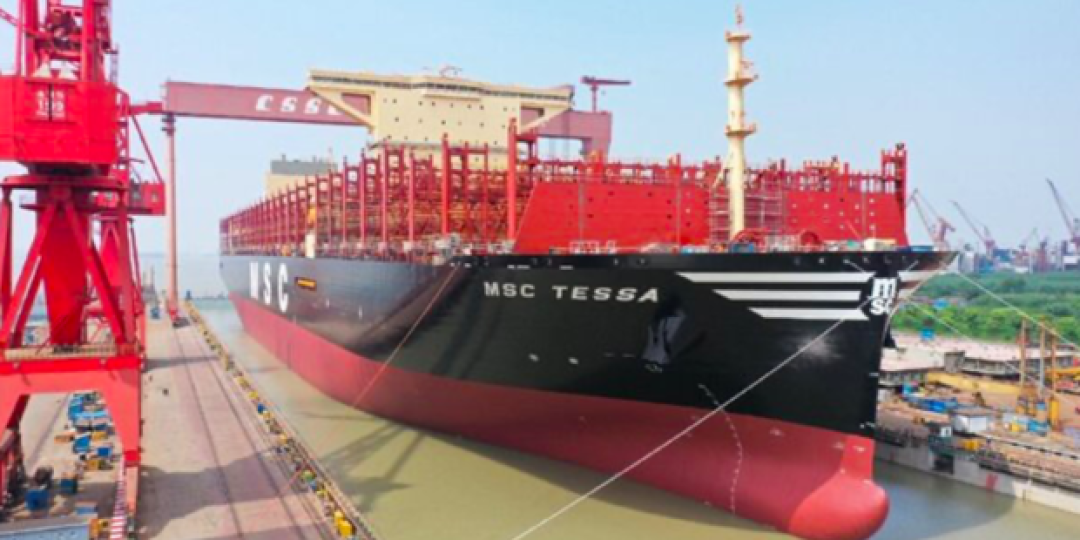 The latest ‘largest’ vessel in the world, the MSC Tessa, has the same overall dimensions as the Ever Alot and Ever Apex. Photograph: CSSC
0 Comments

China’s Hudong Zhonghua shipyard has designed a vessel that it claims is now the world’s biggest containership based on TEU capacity.

The vessel, which is being built for MSC, increases capacity compared to a similar vessel that was built for Evergreen and delivered weeks ago, to become the world’s largest containership, Maritime Executive reports.

The latest ‘largest’ vessel, the MSC Tessa, has the same overall dimensions as the Ever Alot and Ever Apex, which were recently delivered to Evergreen by Hudong Zhonghua, a division of CSSC. The shipyard expects to deliver the new MSC vessel later this year.

It has been rated with a loading capacity of 24 116 standard containers, 112 TEUs more than the Evergreen ships, which have been listed with a capacity of 24 004 TEUs. The stacking design for the MSC vessel allows boxes to be stacked 25 layers high.

The shipyard has labelled the vessels as the “Hudong-type” class as the design was developed by its internal designers. The vessels are approximately 1 312 feet in length and have a beam of 202 feet. They have a deck area the size of four football fields and are 196 feet longer than the largest aircraft carrier.

According to the shipyard, the vessels have a small bulbous bow, large diameter propellers, and energy-saving ducts. The MSC Tessa is also the first newly built ship for the line and the shipyard to have an air lubrication system for the hull that will reduce fuel consumption by an estimated 3-4%. A shaft generator system will also reduce fuel consumption and improve its Energy Efficiency Design Index (EEDI) rating.

According to Alphaliner, MSC has 114 ships on order with a total capacity of around 1.5 million TEUs, representing a third of its current fleet size. The line has a 17% market share and a fleet of 690 vessels with a total capacity of 4.47 million TEUs, making it the largest container ship company in the world after overtaking Maersk earlier this year.