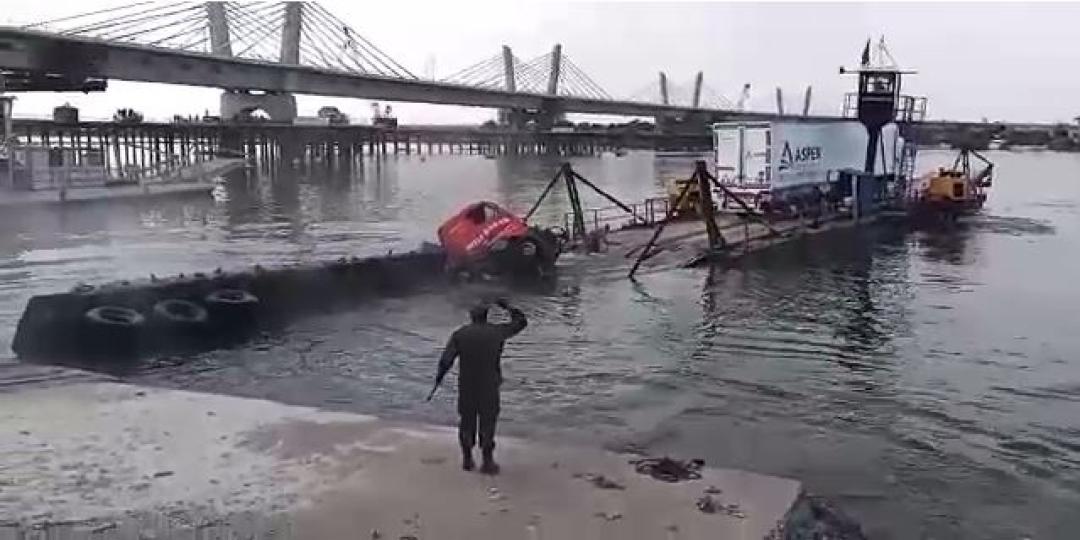 A truck slips off the pontoon crossing the Zambezi where a new bridge remains closed. Source: Transist
0 Comments

Another truck has slipped off the pontoon used to ferry rigs across the Zambezi River between Zambia and Botswana – an important touch-point of sub-Saharan logistics where a new multi-modal bridge is ready to come online but remains unused.

In video footage shared with the Transit Assistance Bureau (Transist), a flat-bed truck can be seen slipping off the pontoon going north towards Kazungula in Zambia.

According to a Transist spokesperson it’s not the first time that this has happened this year.

Earlier, prior to Covid-19 lockdown, a truck also slipped off the pontoon, back then heading south.

Transist said it’s ordinary practice to load two trucks on the pontoon, a smaller vehicle in front and a bigger one at the back.

The pontoon ramps at the pack is supposed to be pulled up though, preventing trucks from slipping off.

However, the pontoon is so old, possibly dating back to the 80s and 90s from the previous century, according to Transist, that it’s not sure whether the ramps are still working properly.

Meanwhile the incongruity of such an incident happening on an important bulk freight and supply-line route in and out of the mineral-rich area straddling the border of Zambia and the Democratic Republic of the Congo, is made all the more stark by the new Kazungula Bridge which can be seen in the background.

Built at a cost of $70 billion and delayed at least since 2018 when it was supposed to have been completed, the bridge – some say – will most likely only open to traffic in early 2021 when all the One-stop Border Post (OSBP) aspects of this important cross-border link is in place.

Optimism among transporters, however, is growing that it may be sooner than anticipated.

The truck that slipped off the pontoon thankfully appears to be salvageable as it sunk in shallow water.

Unfortunately it’s load, which appears to be baggaged cargo most likely consisting of maize, is probably ruined.

Once the bridge is finally in use, it’s expected that the pontoon service will be discontinued, despite early indications that the tariffs for using the Kazungula OSBP could come at a significant cost to industry and that some transporters might still want a cheaper alternative.

However, Namibia and its ambitions to become a logistics hub for the region, especially through the Port of Walvis Bay and its road network championed by the World Bank as the best in Africa, believes the bridge will be worth every sent spent.

In anticipation of the bridge’s opening, the Walvis Bay Corridor Group has been hard at work marketing the Ndola Corridor out of Zambia’s Copperbelt Province. 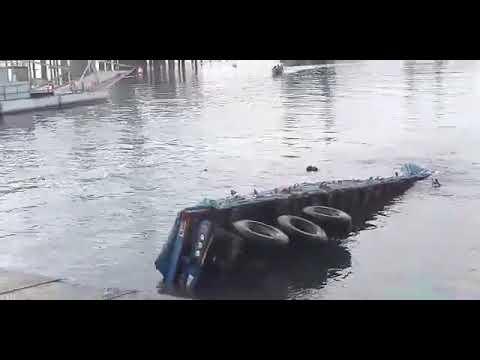