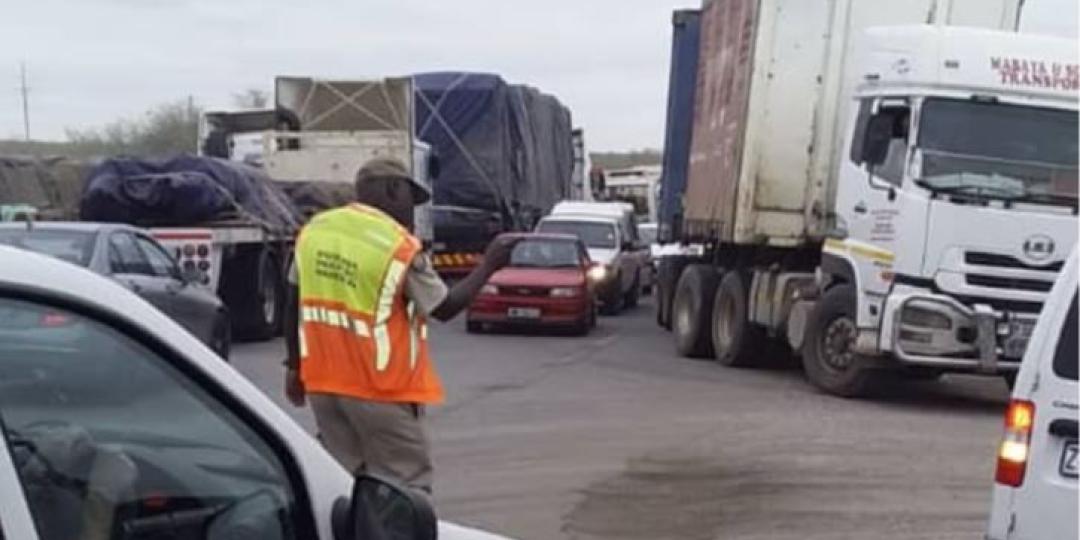 A traffic official seen amid the chaos resulting from congestion south of the Beitbridge border. Source: Fesarta
0 Comments

A motorist died yesterday when a bakkie (pick-up) travelling south towards Musina from the Beitbridge border between South Africa and Zimbabwe collided with a truck that had reportedly crossed into the oncoming lane to overtake gridlocked traffic heading north.

Another occupant who was in the bakkie was in a critical condition, Mike Fitzmaurice of the Federation of East and Southern African Road Transport Associations (Fesarta) said this morning.

The fatal collision once more demonstrates that traffic officials should be held culpable for allowing cars and trucks going north to drive three abreast on a single-lane highway.

Had bottle-necking at the busy border not been such a problem, and had the traffic police done what they’re supposed to instead of allowing chaos on the road, the deceased driver could still be alive.

It’s also not the first time that traffic officials have been accused of ‘coining it’ from congestion south of Beitbridge when customs capacity at the border falls short of spiking cargo volumes and general traffic.

On several occasions in the recent past, especially at Beitbridge, Fesarta has told Freight News how build-up south of the border has been used by corrupt traffic officials to ask for bribes from truck drivers in exchange for jumping the queue or being ‘escorted’ to the border.

“This shouldn’t be allowed at all,” Fitzmaurice said.

“Traffic shouldn’t be allowed to drive abreast on a road like this at all. Trucks should be pulled into safe zones or truck parks and only be allowed to leave once there is space at the border.

“There are going to be accidents such as yesterday’s but nothing is done about it because it fits traffic officials financially. Chaos creates opportunity and all they do is extract bribes.”

According to Fitzmaurice, Fesarta has evidence of traffic officials loitering around, sleeping in their cars, and generally acting as if the clogged-up highway ahead of the border is no concern of theirs.

“They make no attempt to help. They’re only there to direct traffic as long as it suits their back pockets. It’s a totally and utterly corrupt situation and nothing gets done about it.”

Fitzmaurice also spoke out against the SA Revenue Service (Sars) which claims that there’s nothing wrong with processing at Beitbridge.

“They only allow trucks for 30 minutes at a time in the control zone during the clearing process and believe as long as this is maintained it’s not a problem.

“Meanwhile processing at the border is not keeping pace with increasing volumes, resulting in build-up south of the control zone. Sars officials can clearly see this when they drive past the mess on the way to the border but apparently, as long as control zone is free and clear, they seem to think they have nothing to do with congestion outside the control zone.”

When Freight News spoke to Fitzmaurice this morning, the queue was at the Baobab truck stop some six kilometres south of the border, with transporters complaining that they would not make it before the weekend starts.

One truck driver complained that if cargo inspection wasn’t done by day’s end, he would have to wait till Monday as the inspection authorities he referred to did not work over the weekend.