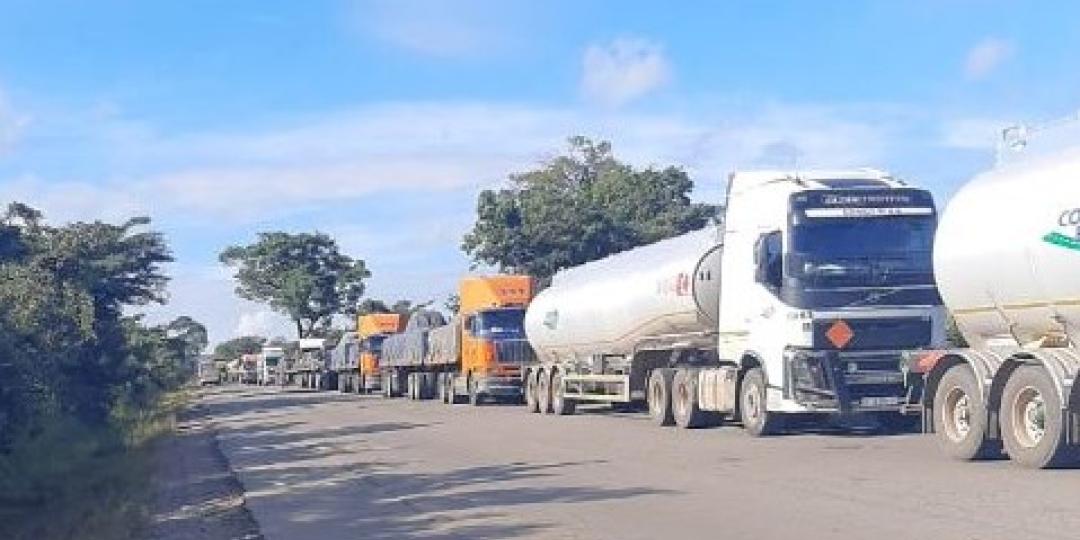 Trucks queue north of Chililabombwe because of border delays at Kasumbalesa between Zambia and the DRC. Source: Fesarta
0 Comments

Queues at two transits on the North-South Corridor (NSC) into the Copperbelt in Zambia and the Democratic Republic of the Congo (DRC) were reported this morning, with staff shortages at Beitbridge and roadworks at Kasumbalesa blamed for the congestion.

Mike Fitzmaurice of the Federation of East and Southern African Road Transport Associations (Fesarta) told Freight News the queue going north into Zimbabwe was said to be about five kilometres long and that the Zimbabwe Revenue Authority (ZRA) was responsible.

“This was refuted though as ZRA has proven that the green lane for traffic is running smoothly and the scanner on their side is working.”

In the meantime Fesarta members have pointed to staff shortages at the SA Revenue Service (Sars) where only one officer was said to be on duty at South Africa’s crossing into Zim.

A further two officers were reported to be off sick.

Fitzmaurice said the association was trying to confirm what was causing delays on the northbound line.

Further north, at the Kasumbalesa border between Zambia and the DRC, a queue of some 20 kilometres had developed because of roadworks immediately south of the border.

The roadworks have been necessitated by emergency repair work to infrastructure on the Zambia side, and are expected to be completed by this evening.

“If not this evening then most likely tomorrow. Once done, it is hoped that they will start pushing through trucks that are queueing south towards Chililabombwe,” Fitzmaurice said.

The road works are also preventing southbound transporters from leaving the DRC.

Return-leg hauliers and trucks with empties can use the road to Mokambo east of Kasumbalesa as an alternative to cross back into Zambia, but it is not clear what the condition of that dirt track is as it’s usually rendered virtually impassable by rain.

What will be interesting to see though about Kasumbalesa is how quickly traffic flow is restored once the roadworks are completed.

Although it was once notorious for severe congestion, Kasumbalesa has become a benchmark border of sorts, demonstrating what can be accomplished when public-private sector interests rally around collective improvement objectives.