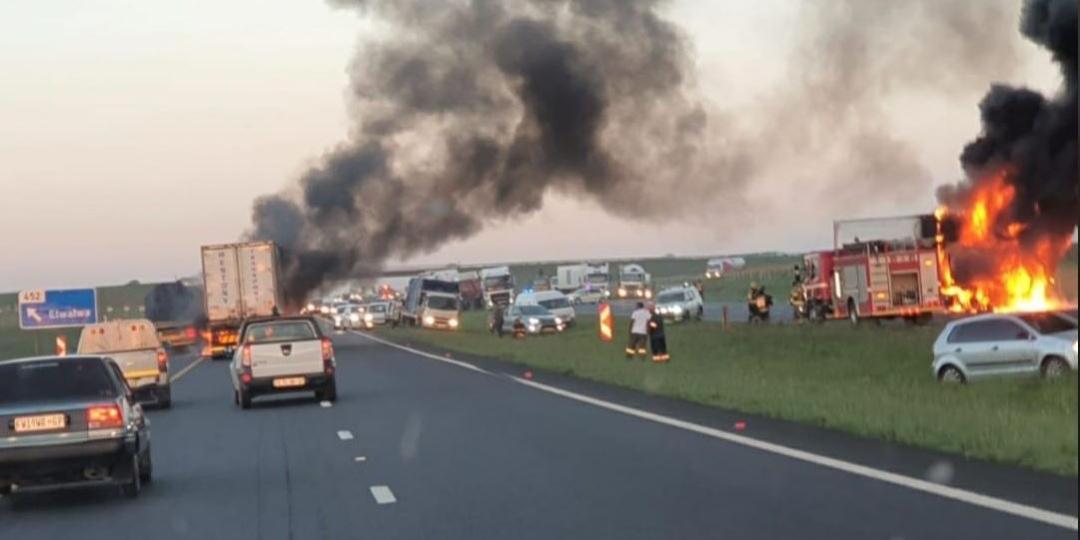 The spate of truck burning South Africa has seen, caused by protesters attacking the transport industry, is the worst it has ever been. Source: Transist
0 Comments

Thirty four trucks have so far fallen prey to arson attacks on busy roads carrying high volumes of cargo - mainly to the east of South Africa - since the latest spate of firebombing took the country by surprise last Thursday evening, November 19.

That’s according to Gavin Kelly, CEO of the Road Freight Association (RFA), speaking to Freight News at a logistics presentation hosted by Crossroads Distribution this morning.

It’s also not clear whether Kelly’s tally included the most recent attacks on the R59 south of Johannesburg.

According to information distributed by the Transit Assistance Bureau (Transist) this morning, last night a driver on the R59 “had a breakdown and waited in nearby bushes for help.

“A white Hyundai H100 approached and threw a petrol bomb inside and fled.”

In another incident, also on the R59, a driver stopped to check his tyres and was promptly shot before his truck was set alight.

As the cost of destruction of transport property rises, while fear and intimidation spreads through the sector, industry representatives are increasingly pointing out that the arson attacks aren’t necessarily because of vigilantes venting anger at foreign nationals working in South Africa’s logistics sector.

Commenting on last night’s R59 incidents, Mike Fitzmaurice of the Federation of East and Southern African Road Transport Associations (Fesarta) said “the one truck belonged to a waste company, and although the other company is unidentified, both were South African-registered trucks.

“It confirms that this is not about foreign drivers taking local driving jobs. There is an underlying political agenda here.

“Funny how whenever the Zuma faction is under attack by the justice systems, trucks get attacked and torched.”

Economist Mike Schussler,  addressing attendees at this morning’s presentation by Crossroads – a company that incidentally has also found itself targeted by arsonists – also said it was funny how whenever Jacob Zuma and his state-capture compatriots were under fire, there were flare ups such as what has been seen over the past week.

He pointed out, among other things, that the ANC’s Umkhonto we Sizwe Military Veterans Association were in cahoots with the All Truck Drivers’ Foundation (ATDF), the vigilante organisation responsible for fomenting violence against the transport industry.

Questions are also being asked by the likes of Kelly why ATDF secretary general Sifiso Nyathi hasn’t been arrested yet for inciting violence.

It’s also not clear whether the ragtag ATDF actually has the wherewithal to stage a campaign of chaos such as the country has seen over the last week – the worst it has even been since truck torching became a method of protest in 2018.

“The attacks are orchestrated in a manner to suggest that it is coordinated and carried out in a manner to divert attention away from what we are seeing in the media,” Schussler said with reference to what has been unearthed at the Zondo Commission investigating state capture.

With pressure mounting on Zuma and following ANC secretary general Ace Magashule’s recent court appearance in Bloemfontein on charges of corruption, fraud, and money laundering, it’s not hard to imagine that state-capture loyalists could be behind the violence unleashed on a crucial component of the country’s economy.

“They have an ‘Ace’ up their sleeves,” Fitzmaurice said.